What are the Major Religions - and What do They Believe?

Religion & faith systems can be traced back as far as humanity. People have always lived with different beliefs about who we are, where we came from, and why we’re here. Despite some reports, the world’s “progression” has not changed, slowed, or stopped this. In fact, about 83% of the world’s population fall into twelve different religious categories.

Given that this is such a significant amount of the world, it’s important to understand the basis of these worldviews - as they inform so much of how people think, live, make decisions, etc. For many, this is the very foundation of everything they do in life and their priorities. Regardless of your own personal stance - whether or not you fall into one of these categories, understanding & sharing in knowledge and conversation with the people around us is essential. It is respectful, kind, compassionate, and educational.

Join the conversation - inform yourself on what those in your community believe and be ready to share your thoughts and opinions. In a world that too often pits us against each other because we may disagree, let’s find a way to have healthy dialogue so we can learn about each other’s differences.

Christianity is the largest and most evenly dispersed religion in the world.

There’s roughly 700 million religiously unaffiliated people in China- more than twice the population of the US.

Three quarters of religious people live in a country where they are a majority.

Photo of the day - All Humans! 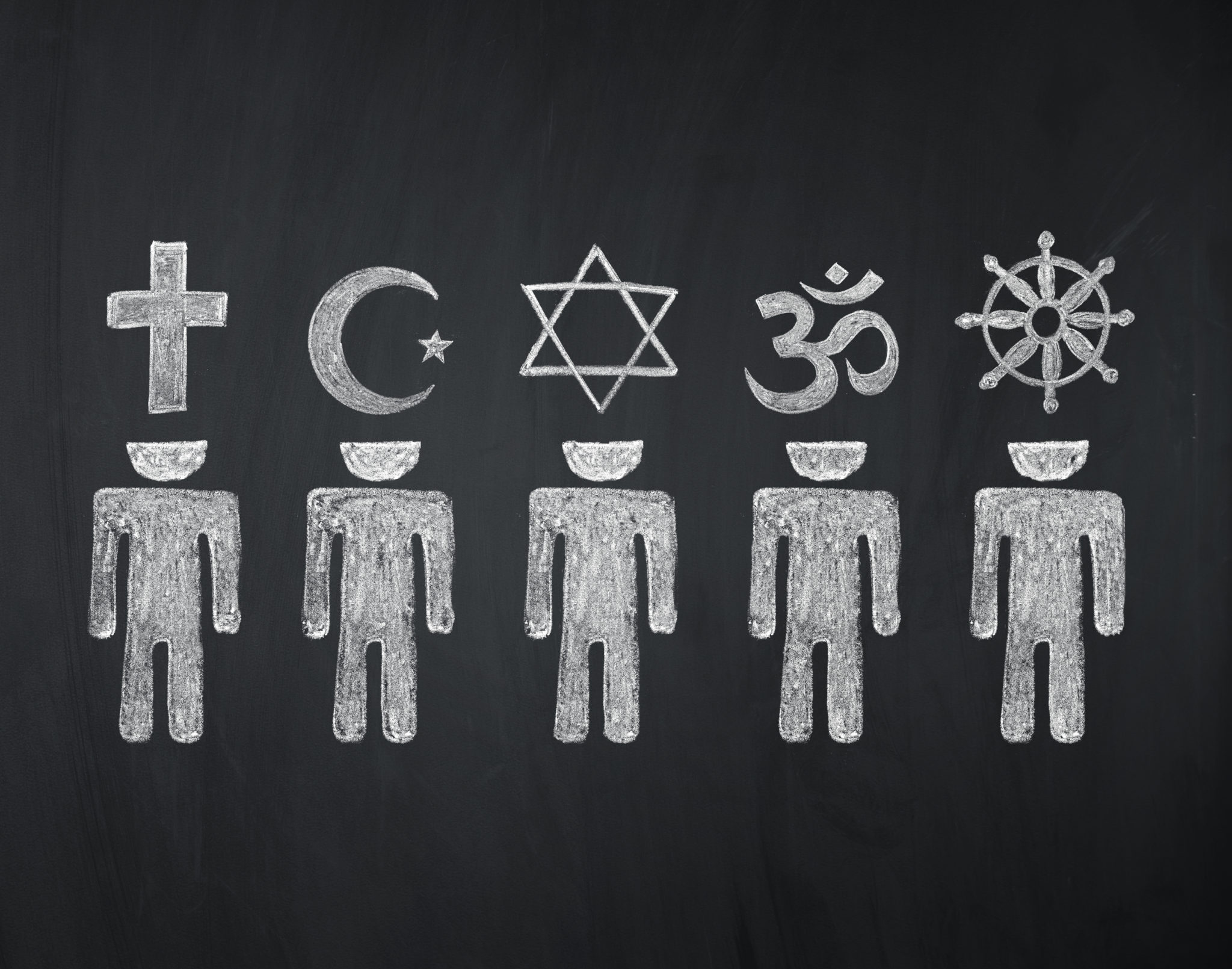 Video of the day - Islam, Judaism, and Christianity - A Conversation

We may have different religions, different languages, different colored skin, but we all belong to one human race.

Article of the day - Major Religions of the World

The world's faithful account for 83% of the global population; the great majority of these fall under twelve classical religions—Baha'i, Buddhism, Christianity, Confucianism, Hinduism, Islam, Jainism, Judaism, Shinto, Sikhism, Taoism, and Zoroastrianism. These twelve religions are the most prominent spiritual traditions that still exist. There are many smaller or less well-known religions. However, due to how much (or how little) different religions are represented in different communities, the layperson might not know much about the beliefs and traditions held by religious people worldwide. Infoplease is here to help with our overviews of nine of these classical religions.

Judaism is a strictly monotheistic religion practiced by the Jewish people, an ethnic and religious nation descended from the historic peoples of Israel and Judah. Judaism as it would be recognized today originated in the Middle East in at least the 500s BCE, although certain religious traditions or beliefs can be traced back much further. Its adherents have long faced persecution from dominant religious groups around them. The Roman Empire destroyed the Second Temple, the center of Judaism, and the nation was scattered. Through to the modern day, Jews have been the victims of intense violence and discrimination. All the same, Judaism has persisted and remains one of the most visible and widely practiced religions in the world.

Christianity is a monotheistic religion centered around the personage of Jesus of Nazareth, or Jesus Christ. Christianity arose in the 30s–50s CE as a religious offshoot of Judaism based on the teachings of Jesus, who was himself Jewish. Early Christianity rejected many of the social, cultural, and religious institutions of Judaism and pursued radically different strains of spiritual thought. Within a century a recognizable Church was founded. The texts of the faith and its most important creeds were codified in the 300s CE. Despite persecution, Christianity became the state religion of the Roman Empire and all of its inheritors, and in the time since the different Christian denominations have collectively become the largest faith in the world by a wide margin.

Islam is a strictly monotheistic faith founded by the prophet Muhammad in the year 607 in present-day Saudi Arabia. His teachings, collected in the Quran, claim common descent with many Jewish and Christian beliefs. Muhammad preached his faith in the city of Mecca despite opposition from local polytheists, and quickly built a religious community of early Muslims. The community was forced to relocate to Medina in 622, after which the group codified and began their expansion across the Arabian peninsula. Nearly all of Arabia converted to Islam by 632, the year of Muhammad's death, and in the years since it has grown to become the world's second largest religion, mostly concentrated in the Middle East and Southeast Asia.

Baha'i is the youngest major world religion, founded in 1863 by the prophet Bahá'u'lláh. Baha'i grew out of the earlier religion of Babism, whose founder the Bab presaged the coming of another great prophet like the coming of Muhammad. Baha'i originated in Iran, although its current center is in Haifa, Israel. Baha'i is a monotheistic religion, but it teaches that religious truth is manifested and revealed by the founders of all the major world religions, including Jesus Christ and the Buddha. Baha'is believe that the different cultural interpretations of religion all have the same goal, and they strive for prosperity across faiths. There are around eight million Baha'is today, who indirectly vote for the leaders of their religion every few years.

Zoroastrianism is perhaps the world's oldest monotheistic religion, founded by the Persian prophet Zoroaster. It is first recorded in the 500s BCE, but many historians believe it was founded as early as the 900s BCE. Zoroastrianism became the dominant religion of the vast Achaemenid Empire of Persia, and it continued to play an important part in the region until the ascent of Islam in the 700s CE. Many credit Zoroastrianism with affecting the development of other major religions. Zoroastrianism declined through the medieval era, and today there are fewer than 200,000 Zoroastrians as of the last reputable survey. However, there are some indications that many Kurds are converting to Zoroastrianism, which they see as an ancestral religion, which may reverse the long declining population.

Shinto is the traditional religion of Japan, which incorporates a vast array of local beliefs and customs across the nation. These traditions were collected and described as something like Shinto in the 800s CE, although the different beliefs predate this. Shinto is, for the most part, not an organized religion, and is instead the foundation of many cultural practices in Japan. Likewise, it's difficult to produce a number of people who follow Shinto; based off of membership in Shinto organizations, only 4% of Japan follows the religion. However, up to 80% of Japanese people (even ones who proclaim no religious belief) still keep shrines and make Shinto prayers. The intimately cultural quality of Shinto means that it is limited almost entirely to Japan.

Hinduism is by many accounts the oldest religion in the world, due to its origins in Vedic beliefs dating as far back as the 1500s BCE. The religion has no founder, and is a synthesis of many different Indian religious traditions. The religion waxed and waned in competition with Jainism and Buddhism throughout Indian history, before seeing a huge resurgence after the medieval period. Thereafter it became the dominant religion on the Indian subcontinent. Hinduism is one of the most geographically concentrated of the major world religions—of the world's 1.12 billion Hindus, 1.07 billion live in India and Nepal. The sheer number of practitioners, however, makes Hinduism the world's third largest religion.

Buddhism is a religious tradition founded by Gautama Buddha in the early 400s BCE, drawing from (or opposing) many of the same Vedic traditions that inform Hinduism. Buddhists engaged Hindus and Jains in religious dialogues for centuries, developing mutual competing traditions and beliefs. Buddhism flourished in India, receiving support from several powerful leaders, before declining during the medieval period. Buddhism continued to grow and develop in East Asia, having a profound impact on the cultural landscape of the entire region. Buddhism is today the fourth largest religion in the world, being the majority religion of many countries in Southeast Asia, and with nearly 200 million practitioners in China.

Jainism is an ancient religious tradition from India; per its practitioners Jainism is eternal, or at least older than Hinduism, but many historical estimates will place it contemporary with Buddhism as a Classical offshoot of old Vedic tradition. Like Buddhism, Jainism received varying degrees of support or opposition from powerful sponsors, and was in constant dialogue with India's other religious traditions. Unlike Buddhism, Jainism didn't spread far outside of its home in India, and today the vast majority of the world's 4-5 million Jains live in India. The Jain community enjoys a large profile, however, due to their high literacy rates and the esteem Mohandas Gandhi professed for Jain teachings and beliefs.

Sikhism is a young religion founded in the early 1500s CE in Punjab (Northern India) by the Guru Nanak. Guru Nanak was raised as a Hindu in the Muslim-ruled Mughal Empire, but he rejected both dominant faiths and began preaching his own religion. A community formed around him. Over the next two centuries, the Sikhs would be led by nine more gurus. The last living guru named the Sikh holy book, Guru Granth Sahib, as his successor, and there has since been no single leader of the Sikh community. Despite being a religious minority, the Sikhs overthrew the Mughals and founded a major empire in Northern India in the 1800s. By different definitions Sikhism is either the fifth or eighth largest religion in the world, mostly concentrated in their home region of Punjab.

Confucianism, it must be said, is not a religion in a strict sense. It is a philosophy that draws on the folk religion of China. Confucianism as a school of thought was founded by the Chinese philosopher Kǒng Qiū (孔丘), better known as Master Kǒng or Kǒngzǐ (孔子), during China's Spring and Autumn period in the 500s BCE. It quickly became the preeminent of the "Hundred Schools of Thought" and became the foundation of the later imperial government of China. The Chinese folk religion that Confucianism draws on is still concentrated in China, but its teachings are widespread throughout East Asia. Note: Kǒngzǐ, or the more honorific Kǒng Fūzǐ (孔夫子) was latinized as Confucius by Jesuit missionaries in the 1600s.

Taoism is a philosophy and religion originating in China around the same time as Confucianism, and was the primary rival to Confucian thought out of the Hundred Schools. Taoism claims descent from the (perhaps mythical) figure Lǎozǐ (老子), which literally means "Old Master." Taoism shares some common elements with Chinese folk religion, but the core teachings differ (unlike Confucianism). Taoism has been immensely influential on Chinese and East Asian cultures, with Taoist thought influencing everything from literature to medicine to martial arts. Due to the syncretic interactions of Taoism with Chan Buddhism and Confucianism, it is hard to find a hard number of Taoists, but Chinese religions collectively are the fifth largest religion in the world.

Question of the day - What is the most surprising thing about popular religion?

What is the most surprising thing about popular religion?