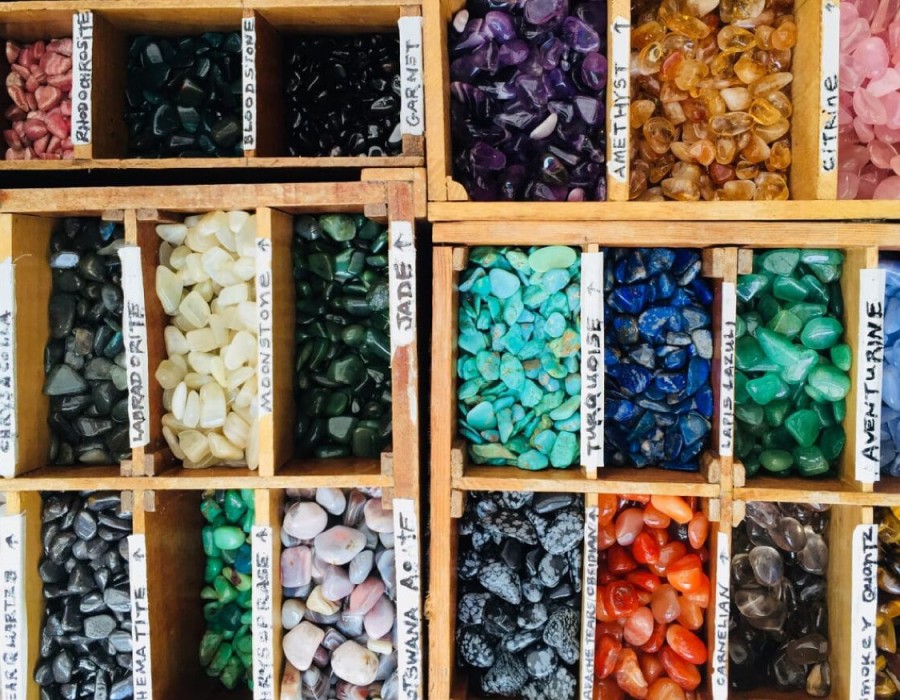 Lapis lazuli is a rare and powerful stone, known as the national stone of Afghanistan. It has a characteristic blue color, a vitreous to oily luster, and a hardness of 5.5. It is produced mainly in Afghanistan, Chile, Russia and the United States. It is also the main raw material for natural blue pigments.

And if the blue color is intense, pure and uniform, the quality and value will be higher. On the contrary, if it is interspersed with white lines or spots, the concentration, purity and uniformity will be impaired, which will lower the quality and price.

As lapis lazuli is usually a granular aggregate of many minerals, cracks and crevices in the crystal are inevitable. This makes it a delicate stone that must be treated with care and attention.

History: One Of The Oldest Gemstones

Lapis lazuli is one of the oldest gemstones, developed and used by Central Asian countries as early as 6,000 years ago. Its vivid blue lapis lazuli color conquered the hearts of all peoples.

Thousands of years ago, in ancient Egypt, the value of lapis lazuli was comparable to that of gold. In ancient India, Iran, and other countries, lapis lazuli, turquoise, and coral were precious stones of great value. In ancient Greece and Rome, wearing lapis lazuli jewelry was considered a sign of wealth.

In ancient China, this blue gemstone was favored by emperors and was often buried in the tomb, because "its color is like that of the sky", also known as the "emperor blue".

In Ancient Babylon And Egypt

As a detail, lapis lazuli was very valuable in ancient Babylon and Egypt, and is expressed in poetry. For example, the demon god of the moon is described in this divine song: "Strong as a bull, great head and horns, perfectly shaped, long hair on his forehead, as big as lapis lazuli."

At the time, this gemstone was believed to be a cure for melancholia and "intermittent malaria," an intermittent fever that recurred every three days.

Lapis lazuli used to be an important item in the list of tributes given to Egypt, and was one of the most important gifts that the Babylonian kings made to the Egyptian kings. Amulets, cylinder seals, stones with sacred scarabs, and other artifacts found in ancient tombs and preserved in museums were made from this material.

Therefore, although it took several years to return with their precious cargo, merchants traveled long distances to the Badakshan mines to obtain this stone.

When gold and silver looted from the defeated country were reported, it was often listed ahead of gold and other valuables.

In Ancient Greek And Roman

From Greek and Roman antiquity to the Renaissance, lapis lazuli was always ground into a powder to make the ultramarine pigment used in many of the world's most famous paintings.

In the Middle Ages, the decoration of manuscripts was a highly skilled art, and monks used the stone in the binding of scriptures by grinding it into powder, wetting it, and kneading it with beeswax, rosin, and sesame oil. This pigment was so valuable that working with it was a sign of wealth.

The ancient Chinese called lapis lazuli "dark blue star-colored stone". They developed it as a cosmetic for eyebrows and made pearl-encrusted screens with its scales.

As the blue color of lapis lazuli is similar to that of the sky and the ocean, it is not only poetic, but also signifies hope, peace and harmony.

Furthermore, lapis lazuli is also a symbol of wealth and authority. In ancient Greece, Rome, and Egypt, lapis lazuli had the same value as gold, and wearing lapis lazuli jewelry meant that a person was very rich. In ancient China, lapis lazuli was the favorite of the ancient emperors, as it signified the sublime majesty of the heavens.

Lapis lazuli is not graded as strictly as diamonds on the market, and there is no uniform standard; some are classified according to A-AAAAAA, others according to their color, which can be roughly divided into 3 categories:

Lapis lazuli which has a pure dark blue color, no gold (pyrite) or white (calcite) impurities, a fine and hard texture, more than 99% of lapis lazuli minerals, is of the best quality and usually costs around $15 /gram; The price will be higher if it is made in nice sizes or accessories;

Lapis lazuli which has dark blue, sky blue or navy blue color, and gold or white impurity, is relatively cheaper, costing around $5-$12/gram;

Lapis lazuli which has black and gold and white impurities is very cheap, costing around $5-$20/piece.

Some rules to help you incorporate graphic tees into your style

Iranian Culture: What You Should Know About the Best Iranian Nuts and Spices