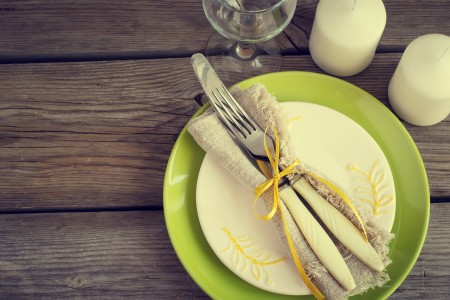 This type of predicament always makes me think of my pal Kristin. We were in grad school together and four of us went to a falafel place for lunch. Everyone had a beer except Kristin, who had a soda, which was 40¢ (yes, cents) cheaper. When the bill came and someone said, "well, that's $7.50 for each of us," Kristin piped up with, "$7.10 for me!"

I doubt your friends are any more interested in having you subsidize their meals than I was in Kristin paying for 10¢ of my beer (they wouldn't be such great friends if they did), but humans are creatures of habit. If in the past the four of you have gone out and not worried about who ordered what, it's perfectly understandable that they assumed that was going to happen again. My guess is they had no idea you had partaken of a significantly smaller meal and thus might feel entitled to pay less of the bill.

Traditional etiquette rules that the person who issues the invitation pays. This is a fabulous fall-back position for many situations, but is clearly out of step with how many of us socialize. Those of us inhabiting 21st-century America tend to either split the check more or less evenly or divide it out based on what everyone ordered. Some friends take turns treating, or shift between one person footing the bill and the other person leaving the tip. In short, most of us work within an (often unspoken) agreed upon system with our friends.

Just because that's how you've operated in the past, however, is no reason to continue, especially when your circumstances have changed. You ask what the right way to handle the situation is, and the right way is to speak up. Waiting until the bill shows up is awkward—better to say at the outset "I've really been looking forward to this dinner. I know we usually split the bill, but since I've switched to freelancing I'm trying to keep an eye on my finances, so I'll be asking for my own bill."

Even if you wait for the bill, a person can say, "I know we've split the bill in the past, but would anyone mind if I just put in for what I ordered?" No need to go into details (saying "you guys drank way more than I did" isn't going to win you any points) unless asked, but be sure to include the tax and tip on your portion.

Note, however, that you only get to do this if, in fact, you don't/didn't partake of the bottles of wine or tuck into the shared appetizers.

If your friends are anything like mine, they may well offer to treat. Perhaps under the guise of celebrating your new, if for the moment less stable, employment.

Some rules to help you incorporate graphic tees into your style

Iranian Culture: What You Should Know About the Best Iranian Nuts and Spices