You don't have to be a genius to have an ingenious idea. 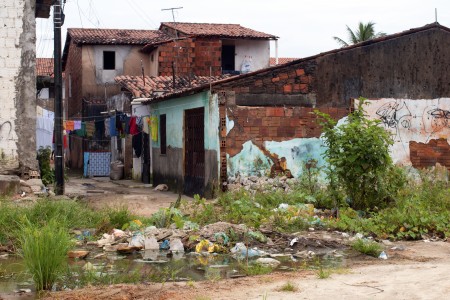 I grew up in the 70’s and 80’s in a small fishing village on the east coast. In my town, almost everyone’s father made a living as a fisherman. If you didn’t have sea legs or the opportunity to work aboard a boat then you worked onshore unloading, filleting or transporting the fish to market. Most mothers were “housewives,” as they were referred to back then, and stayed at home with the children. When boys got old enough, usually around the age of 15 or 16 they quit school to follow their fathers and their father’s fathers to sea or to the local fish plant where the idea of money and freedom were much stronger influences than finding the angles of an isosceles triangle. For girls the idea of going to college was a rich person’s dream and, besides, they were only going to get married and have children anyway. So the average level of education in this town was grade eight. Knowing the basics, how to read and write, add and subtract were all they felt they needed to know.
The fishing industry was feast or famine. It not only depended on how much fish you caught, but what kind of fish you caught. If the load was cod, haddock, or halibut you made some decent money. If the load was redfish or flounder, you were destined to get behind in your bills and have to rob Peter to pay Paul. Like most families we struggled. We struggled to get groceries, we struggled to pay the mortgage, and we struggled to keep our cars running. Extras like school clothes, or glasses or furniture were purchased on lay-away or drawn-out payment plans laden with interest, but if we needed something it was the only way to get it.
There was this one family that lived on the edge of town, a family known to get by on even less money than most, a family whose moral compass was more than a little twisted and whose collective educational accomplishments were below the average grade-eight level, who did something that most of us wouldn’t do, but yet we had to applaud for their ingenuity. Apparently, this family “purchased” a few pieces of furniture from a store with a typical contract of zero-money down and a payment plan that was to be paid monthly until the items were paid off. The furniture was delivered, and set up in their house. As the months went by, despite what I can only imagine as persistent and increasingly rude phone calls from the furniture store and eventually from the collection agency, the payments were never made.
At some point repo-men were hired by the store and arrived to repossess the unpaid items. The family let the men into the house and told them to take the furniture away, if that was what they were sent there to do. The repo-men lifted up the first piece of furniture and headed towards the door. They turned it one-way and then the other. They were puzzled why they couldn’t get it through the doorway. They tried another piece of furniture and it too wouldn’t fit through the door. Turns out, after the furniture was delivered, the family reconstructed the doorframes so they were smaller, just enough so the furniture couldn’t be removed from the house. Now, that’s thinking outside the box.

Use These Tips For A Good Travel Experience

How Do You Hire Low-Cost SEO Companies To Generate Site Traffic?