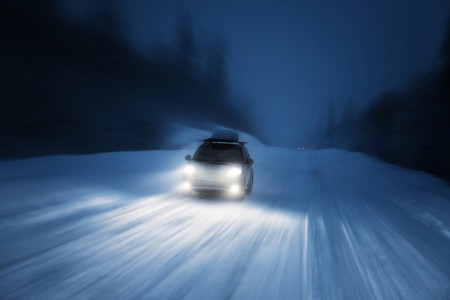 The parents were out of town. They also left their car, a chevy Orlando, you know, the kind you see old people cruising around in, with their golf clubs and liver spots. It was just me, home alone at seventeen years of age, of all the deviant ruckus I had planned, this squashed the cake. I called up my friend, Gary, and Gary was a pretty easy going character, open to mostly anything that didn’t directly impose a threat to his future. I on the other hand, had no future, just the sum of my choices. Soon an idea began to form. Gary and I had lifted the pair of skis into the mommy mobile and threw in about twenty feet of rope and a metal bar. Key in the ignition and we skidded around the corner. 15 minutes later we were up onto of Connor road rigging up what we would later recall as a mistake. The pole was attached to the skis and my feet were in my boots, and those boots fastened into the skis. We were ready, I was ready. With one end of the rope tied to the car and the other end tied around the bar. Grasping the bar firmly I yelled at my friend to “Giver”, he slammed on the gas petal and away we went, gradually picking up speed, zooming down the road the snow was coming down, the speedometer read “90 kilometres/hour”. There is no greater thrill than whipping down a backstreet at a breakneck speed while pedestrians look in awe, with a hint of resent, they were just jealous they didn’t utilize their youth. Eventually we approached a ninety degree corner, we had to slow down, but there was no slowing us. We drifted, almost around the corner, alas, the ice was too mighty for that damn granny machine. With a dull thud, we had plowed head on directly into the snow bank. We asked ourselves how could this have happened, we hadn’t even been drinking. Gary and I spent nearly an hour trying to dig out the bulk of it when a city plow came along and offered to take a look at it. The worker took one look at the situation, chuckled and said “you boys are right f***** not much I can do for ya”. So we had only one more option, the snow was hammering now, the impending blizzard was on its way, I had decided to call my friend Liz, and thank her for coming to the rescue. She came alright, in her shifty, unpredictable red minivan. She reluctantly tied the rope to her van and slammed on the gas, nothing happened. We spent another hour trying to fix the problem when another set of gentlemen who looked like they had been subsisting off fish and bear meat for months, came along in a station wagon. They offered to give us pull, and finally with the nineties wooden panel station wagon, we were free, the little engine that could, certainly did. Gary and I went home, but before we did we noticed that the bumped was a little mangled, but not irreparable. We didn’t bother worrying about it, that was a tomorrow problem. One year later he crashed my mother’s van into a cement girder, drifting around a parking lot, nobody was hurt and Gary is currently pursuing his dream of becoming a nanotechnological engineer. Mistakes are made, experiences make up the foundation of who we are and what we learn.

What you should know about venous ulcers and treatment?