I remember the 2016 election vividly. It was a day of excitement, energy, and anxiety. I can tell you where I was, who I was with, and what all of us were feeling the minute we found out that Trump was elected.

This election, only four years later, not only are all of our lives different, but the world has changed. Since that day, we've been through a global pandemic, lockdowns, life changes, and have a very different economic and political landscape.

In the 2020 election, citizens' main concerns were human rights, healthcare, climate, and the economy. While at first glance, these seem to be true of many previous election, there's no question that they're certainly playing out differently in this one.

Political polarization and division has been increasing rapidly for more than these last four years, but what will that look like now? Depending on who you ask, there's different cause for it -- but personally I'm not of the opinion that any one individual has changed the way an entire nation speaks to one another.

In 2024, President Trump could run for reelection (assuming Biden takes office now). Many of the top contenders for the Democratic nominee over the last few years will likely not run again (Sanders, Clinton), so if Biden chooses not to run for reelection, we may have fresh blood running.

One way or another, if the division splitting the nation continues, and it appears to be doing so, it will likely worsen. Civil discourse is no longer the normal, or even the expectation for debates, discussions, and reports.

Regardless of your political stance, values, or views, be challenged to take these next four years to learn. Educate yourself on things you didn't know, particularly about those you disagree with. Seek out relationships with people who've led different lives. Strive to converse, coexist, and work together to build a better America for everyone.

There is more division in U.S. public opinion of coronavirus than other similar nations.

60% of Democrats say it is more important for people to feel welcome and safe online than to be able to speak their mind. 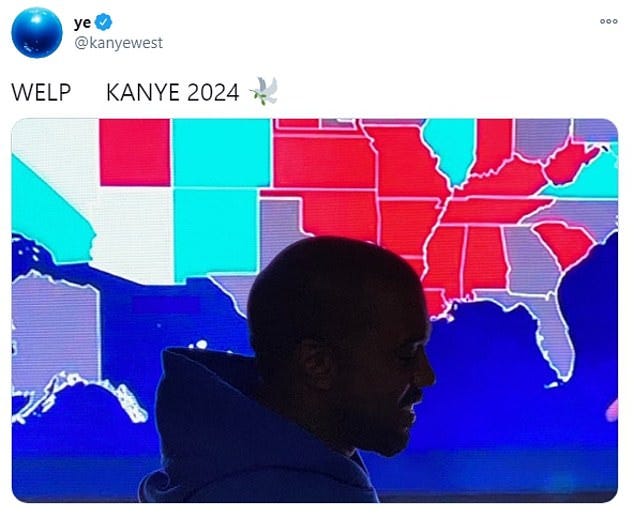 Video of the day - My Way Too Early 2024 Election Prediction

All for one and one for all, united we stand, divided we fall.

Article of the day - Who might run for election in 2024? Trump, AOC, Kamala Harris and more

The 2020 presidential election is still undecided but that has not stopped speculation about the 2024 race.

With Donald Trump all but set to become a one-term president, and Mr Biden, who will assume office aged 78, unlikely to hit the campaign trail a second time, a host of (new and old) names could appear on ballot in four years time, for both Democrats and Republicans.

With a narrow path to the White House and a second term as US president increasingly in doubt, Donald Trump could come back as a candidate at the next election.

Bryan Lanza, who served on Mr Trump’s transition team as communications director in 2016, said recently that the Republican president would be in a “good position to run again” in 2024.

"He has got the apparatus, he has got the support. If he were to lose a very tight election today, he can make the claim that it wasn't a fair and free election,” Mr Lanza told the BBC.

“I think he can make a strong case to run again and I think the Republicans would step aside and let it happen," said Mr Lanza, “and there’s nobody in the Republican party that can challenge President Trump in the primaries,”

Whether Republicans mounted any opposition to such a move, remains in doubt, with Mr Trump able to pull-in more than 67 million votes on Tuesday, despite opinion polls, an economic collapse and the coronavirus pandemic.

Still, Mr Trump has admitted in public that the presidency was “lonely” and “mean”, so maybe America will never be made great again (MAGA)?

The American rapper and billionaire had announced a 2024 election bid more than a year ago, when he told a New York audience that he was “not going to run, I'm going to walk,” in 2024.

He went on to announce a somewhat controversial 2020 campaign, that missed many state deadlines for registering as a candidate before he even began.

Mr West, who denied claims he was in cahoots with Republicans in a bid to disrupt Democratic chances, attracted just 57,000 votes on Tuesday.

Betting on another presidential run, he shared a photo on Twitter with his silhouette against an electoral map of the United States, and wrote "Kanye 2024."

The president’s eldest son suggested last month that liberals’ heads would “explode” in the event he ran for president at the next election, as he posed with a banner that read “Don Jr 2024”,

While he has avoided speculation on a future career in politics, Donald Trump Jr. has long been idealised as “the emotional centre of the MAGA universe,” as Jason Miller, a senior Trump campaign adviser, recently told the New York Times.

But most Americans are not so sure, with only 16 per cent of voters saying he should dedicate himself to politics, according to a poll commissioned by the Independent.

His siblings did not perform any better in the survey, in an apparent blow to the Trump family treading the same path as the Roosevelts, the Kennedys, the Bushes, and the Clintons, among America’s political dynasties. Watch this space.

“They’re all screaming Ivanka,” said president Donald Trump as he campaigned in Florida recently, and warned that Kamala Harris, the Democratic vice presidential nominee, “will not be the first woman president.”

The 38-year-old, who, like her brother, has remained coy about her own political aspirations, has repeatedly insisted that she was focused on supporting her father in the White House and on the campaign trail.

Mr Trump went on to say that his daughter would rather “be at home with the kids” than “out working” on his behalf, and most Americans surveyed in a poll for the Independent seemed to agree.

Ms Trump’s prospects, among Trump supporters, were even worse than those of Mr Trump Jr, with only 31 per cent saying she should continue in her father’s footsteps, while 36 per cent thought it was a bad idea.

President Donald Trump’s second son, while lesser known, could follow in his father’s footsteps and run for president in 2024.

As an executive vice president at the Trump Organization and a Trump campaign surrogate, the 36-year-old arguably has more political experience than the 2016 Republican nominee, and recently indicated he might be interested in a 2024 run for the White House.

Observant users on social media noticed last month that he liked a tweet that read “Eric Trump 2024,” in what was the surest move yet that he would, at least, entertain such a feat.

Senator and 2016 Republican presidential candidate, Marco Rubio, has more recently suggested that he might give running for president a second go in 2024.

"I ran for president once before, so clearly I'm not going to tell someone I'm not interested in running for president - I already ran for it once," he told CNN when asked about a 2024 bid.

Mr Rubio, whose previous attempt was ultimately defeated by Donald Trump’s candidacy,  struggled to gain traction in the 2016 Republican primaries, but could prove more successful next time around.

After voters were made to choose between the two oldest presidential candidates in history this week, they might find that the 2024 presidential race looks a lot different, and much younger, than in 2020.

And that, in part, could be down to the candidacy of progressive Democratic congresswoman and “Squad” member, Alexandria Ocasio-Cortez, who will have turned 35 years old by the time of the next presidential race.

Joe Biden, who will assume the presidency aged 78, is widely expected to serve only one term, allowing the next generation of Democrats to enter the fray.

Speaking in March this year, Ms Ocasio-Cortez told supporters that when it came to a presidential bid, “I'm not a person who aspires to a position, I aspire to a mission.”

Still, the 31-year-old was the most popular bet among those gambling on the 2024 presidential race, reported Forbes.

The California senator and soon to be vice-president elect, Kamala Harris, has been tipped to run for president in 2024, with the next four years as a warm-up act to a second presidential run.

Ms Harris, who is set to become the first women vice president of the United States, will have already broken precedent before 2024 arrives, and is a proven campaigner.

In fact, the Democrat is already the frontrunner to win in 2024, according to bookmakers and Business Insider, having delivered a strong performance against vice president Mike Pence in a debate last month.

The next four years will prove to be a test of Ms Harris’s approach to governing alongside Mr Biden, and her appeal to Americans.