How Often Should You Have Sex?

We all know one of those couples who just can’t keep their hands off of each other. Restaurant bathrooms, airplanes, wherever they see a chance to do it — they’re doing it.

Though that’s not most of us, a lot of people feel some insecurity around the subject. If they’re having sex that much, should I?

Sexual intercourse carries a number of health benefits, both mentally and physically, and is an important part of most relationships. But can you have too much of a good thing? And is less always more?

The answer is… complicated. Experts believe that each individual has their own unique sex drive, limit, and needs. Figuring out how much sex you should be having comes down to a very important question. How much sex do you want to be having?

We all have different ideas of what sex should look like. Whether you’re waiting till marriage or having casual hook-ups every weekend, you know what you want out of your sex life. When it comes to health benefits, having sex once a week has been shown to give you a good boost. More than once doesn’t add any more benefits, but it doesn’t hurt either.

Listen to your body and your mind. Make sure that you’re making choices about your sex life based on what you want and not what anyone else is pushing you to do.

If your body is telling you to slow down, pay attention. You’ve got a good life to live, and making the most of it doesn’t mean pushing yourself too far.

The average adult has sex once a week.

The average age of first intercourse is 17.

Photo of the day - Benefits of Sex 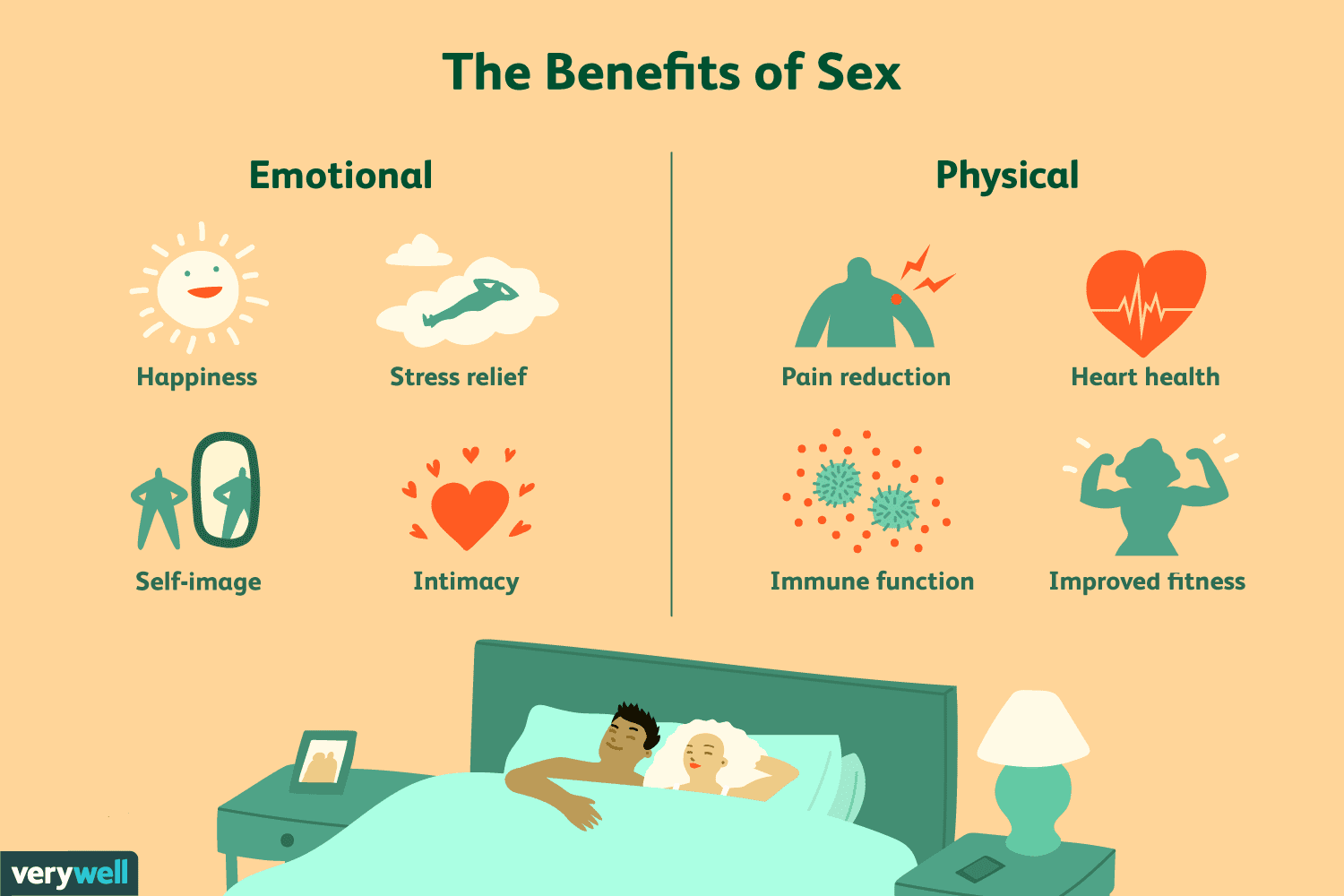 Good sex is like good bridge. If you don't have a good partner, you'd better have a good hand.

Article of the day - This Is How Often Most Couples Have Sex, According to Science

When it comes to sex, people tend to fudge the numbers. Penis size gets inflated, the number of lifetime partners is edited up or down, and how long a sex session lasts can be way exaggerated. (Six hours, really?)

But when it comes to how often couples have sex, science actually has an accurate idea. The average adult gets some action 54 times a year—or about once a week, according to a 2017 study published in the Archives of Sexual Behavior. Another study published in 2015 linked the frequency of sex to happiness. Researchers writing in Social Psychological and Personality Science found that couples who have sex at least once a weekare happier with their relationship than those who get it on less often.

That second study also found that having sex one or more times a week does not affect your well-being any further, so it’s not like hitting the sheets all the time is going to make you OD on happy hormones. “Couples often make the mistake of shooting for some number in order to feel okay about their sex life,” Raffi Bilek, a couples counselor and the director of the Baltimore Therapy Center, tells Health. “The truth is that whatever is comfortable for you and your partner is your normal. You don’t need to be having sex any more or less than you’d like.”

Whew. So if you’re not having sex with the frequency of, say, Claire and Jamie in Outlander circa seasons one and two, it’s NBD.

When you stop focusing on the numbers, you realize that a lot of factors affect how often a couple gets it on, Brian Jory, PhD, a professor and the director of family studies at Berry College in Georgia, tells Health: your ages, values, lifestyle, innate sex drive, health, and, most of all, the quality of your relationship.

“In almost all long-term relationships, something called ‘sexual satiation’ sets in around year two or three,” says Jory. “Sexual satiation is the been there/done that element of coupledom. It’s the human tendency to become bored; it’s not a fault, and it’s nothing to be creeped out about or ashamed of.”

For what it's worth, a third study broke down sexual frequency by age. People under 30 have sex 112 times a year on average (over twice a week), but that frequency declines to 86 times a year among 30-39 year-olds, 69 times annually for those aged 40-49, and roughly 52 times yearly for couples in their fifties and beyond, according to research conducted at the Kinsey Institute in Indiana.

The way you address that satiation is critical for long-term happiness, though. “For some couples, satiation means comfort, security, and predictability,” says Jory. “Others experience satiation as boredom, a letdown, or a sign that they’re incompatible and need to break up.”

Unfortunately, you can end up in a place where you and your partner don’t agree on what’s comfortable in terms of frequency, says Bilek. “You’re not the only ones. Talking about it, perhaps with the help of a professional counselor, is an important part of getting on the same page on the issue. Comparing yourself to statistics,” he adds, “is not.”

And before you freak out about a few weeks of missed opportunities between the sheets, remember: The goal of a relationship is happiness, not sex. “Sex is important to the degree that it makes a couple happy,” says Jory. “And researchers would agree that relationship happiness leads to better sex, not vice versa.”

So if you and your partner aren’t in sync when it comes to how often you rock the mattress, the first line of assessment and treatment is to focus on your relationship. Talk about what’s going on, open up about your needs and fantasies, and don’t judge each other. “Couples need verbal and psychological intimacy before they can have sexual intimacy,” says Jory.

Question of the day - What do you think? Is there such a thing as “too much sex”?

What do you think? Is there such a thing as “too much sex”?