How to Wake Up on the Right Side of the Bed

How do you start your day? Do you wake up cheerful and ready for whatever life throws at you, or do you tend to wake up grumpy and pessimistic?

The truth is that how you start your day really does matter. Walking in with a positive framework can set you up for complete success, but starting out grumpy and unhappy can ruin your whole day. While you may not be fully in control of the circumstances surrounding your waking up, you do have some options to help boost your mood.

Going to bed early and at a consistent time allows your body to get quality sleep on a regular basis, which is a huge factor in your mental and emotional wellbeing. Additionally, laying off alcohol and getting regular exercise will improve your sleep and help you to wake up feeling rested and ready.

You can’t control your circumstances in life, but you control your reaction and response to them. Why not give yourself the best shot at happiness, and start your day off on the right foot?

50-70 million Americans have a sleep disorder.

It’s not just you - sunlight has a direct affect on not only your mood, but your metabolism as well. Getting regular sunlight helps you to regulate eating patterns.

Almost 21 million Americans 18 and up have a mood disorder. 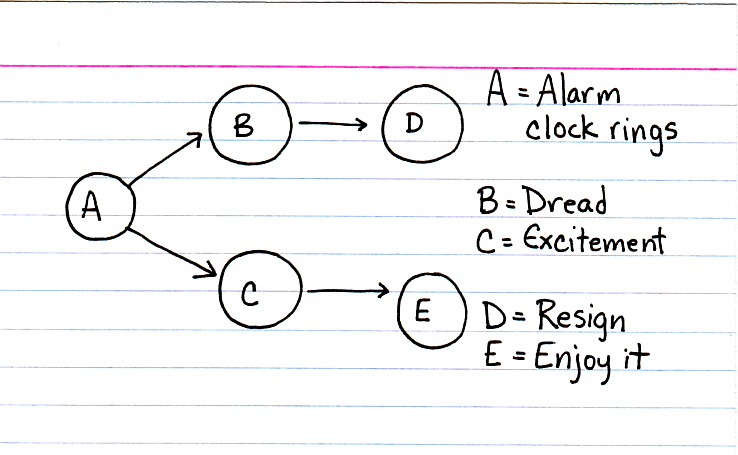 Video of the day - How to Be Happy Every Day: It Will Change the World | Jacqueline Way | TEDxStanleyPark

Everyday I wake up and make the decision that I’m going to be happy. Yes, everyday. Some days are harder than others but that’s okay.

Article of the day - 7 Simple Tricks To Wake Up In A Good Mood, Because Yes, You Can Teach Yourself To Become A Morning Person

There are two types of people in this world: morning people and…not morning people. To morning people, the early hours of the day are a time of productivity and happiness, of birds chirping and sunlight. To the rest of us, morning people are strange and maybe a little creepy. Studies have shown, however, that we would all do well to adopt the habits of naturally early risers; a 2014 article in The Huffington Post reports that research has shown morning people to be happier, more conscientious, nicer, more productive, and less prone to depression than their snooze-button-hitting counterparts. If that weren’t enough, they achieve better grades.

It’s not easy to transform oneself from a night owl to an early riser, but there are a few simple things you can do to make waking up an easier and happier experience. Unsurprisingly, the mood you’re in when you wake up has a lot to do with your sleep, and in the following list, you’ll probably notice a general trend: good sleep equals good awakenings. Read on to learn about seven ways you can ensure that by the time you roll out of bed, you’ll be ready to face the world.

You’re not going to be happy waking up if you’re not getting enough sleep. The National Sleep Foundation recommends that adults between the ages of 18 and 64get between seven and nine hours of sleep every night. It’s also important that you try to get good sleep, so limit your caffeine intake in the evenings and avoid overstimulation—through television, checking emails, etc.—in the hours leading up to bedtime.

2. Turn off your electronics before you go to bed

According to the National Sleep Foundation, light and the absence of light are essential indicators to our brains of when we should be asleep and when we should be awake. Simply put, darkness means it’s time to sleep, and light means it’s time to wake up. Studies have shown that the light emitted from electronic devices, including televisions, tablets, and cell phones, is enough to disrupt our natural rhythms of sleep and wakefulness. So put away your electronics for an hour before you go to bed, and wind down with a book instead. You’ll sleep better and therefore wake up happier.

3. Wake up to sunlight—even if it’s artificial

Just as darkness helps us to fall asleep, light is important to waking. We all have our own circadian rhythms (our internal “body clocks” that tell us when to sleep and wake), and these rhythms are deeply influenced by light. By having light natural build in our bedrooms (as with a sunrise), our brains can start waking us gradually, slowly pulling us out of deep sleep. When we do wake up, it will be less jarring than what we experience with buzzing alarm clocks, and we might eventually begin to wake on our own.

If you have to wake up before sunrise, or winter is keeping your mornings dark, try an artificial sun clock; manufactured by a number of makers, these clocks gradually increase the light in your bedroom as you approach your wake up time, making your awakening more natural.

4. Lay off the booze

Nothing makes a morning terrible like a raging hangover, but it’s not just the hangover that will ruin your morning: Alcohol has a negative impact on your quality of sleep. According to Dr. Russell Rosenberg, a sleep specialist writing for The Huffington Post, alcohol—even modest amounts—can cause people to wake frequently and abruptly throughout the night and worsen preexisting sleep disorders. Alcohol “lightens sleep and suppresses REM,” meaning that even if you spend a solid eight hours in bed, you’ll still wake up exhausted.

5. Wake up at the same time everyday

Getting up early on weekdays and late on weekends can contribute to morning grumpiness. Dr. Jim Horne from Loughborough University’s Sleep Research Centre explains to The Telegraph that “Waking up suddenly from deep sleep produces the worst form of sleep inertia, when the brain’s higher decision-making centres will take several minutes to switch on, especially in young adults.” In order to avoid these jarring awakenings, we should try to wake up at roughly the same time everyday, so that our bodies can get into the natural rhythm of a regular wake-up time. Horne cautions that we should maintain this wake-up time regardless of when we go to bed, suggesting that if you do go to bed much later than usual, let yourself sleep in no more than an extra hour and then take a short nap later.

There are lots of reasons to exercise, but one significant one is that you’ll wake up more well-rested. A 2011 study published in Mental Health and Physical Activityfound that people who exercise at least two and a half hours a week have better sleep quality, fall asleep more easily, and report less tiredness during the day than people who don’t exercise.

7. Get the coffee brewing before you get up

A 2008 study found that the aroma of coffee may have the ability to reduce the negative effects of stress related to sleep deprivation. You can now purchase coffee makers that can be programed to automatically begin brewing at any set time. Thus, you can program your machine to start brewing just as you’re waking up—the smell might ease your transition into wakefulness. And if not, well, at least you have some coffee, right?

Question of the day - What’s your favourite thing to do in the morning?

What’s your favourite thing to do in the morning?

March 26th 2020 - New Parents: What to expect, and what you weren’t expecting