It's Okay to Lean on People

One of the greatest lies the world tells us today is that we are intended to find success on our own. Perhaps more dangerous, it leads us to believe that this is possible and/or healthy. The self-empowerment community has a strong presence, and while much of the narraive is healthy, pushing things like "go it alone" or "the only person you can depend on is yourself" is extremely toxic.

It's okay to lean on people. In fact, if you want to get anywhere in life, you'll probably have to. Psychology, human experience, and history have shown us that time and time again, we are most successful when we ask for help. Mentors, friends, and community are there for a reason, and we crave them not because we're weak, but because we know how much we need them.

If you have big goals, rather than trying to do it all on your own, prioritize creating balance in your life. Pour into work, side projects, and passions, but as you do, pour into people. Invest in your relationships. Develop solid friendships, romantic relationships, and be a contributing member of society.

When someone needs help, show up for them. Not only because it's the right thing to do, but because before long, you too will need help. And when you do, you need to be able to ask for it from people who care about you and who know you have their back.

Like it or not, you need community. You can't do it alone, and forcing yourself to try will only make it harder. Lean on people. Show up for your friends. When you care about someone, tell them. Your goals are doable, but they'll be much easier if you work for them.

When it comes to lifespan, having a network of friends is actually more beneficial than having a close family.

Most adults, when asked how many confidants they had, said "zero".

Photo of the day - You Don't Have to Do it Alone 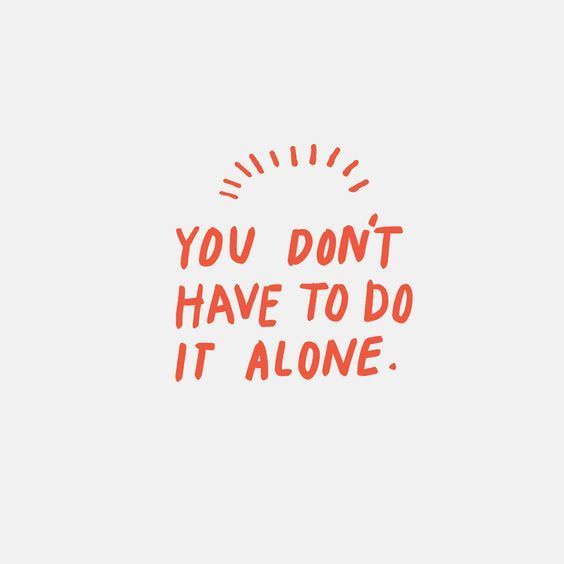 Video of the day - Do You Really Need To Have Friends?

Never underestimate the empowering effect of human connection. All you need is that one person, who understands you completely, believes in you and makes you feel loved for what you are, to enable you - to unfold the miraculous YOU.

Article of the day - The Power of Community: 6 Reasons We Need Each Other

“Remember, we all stumble, every one of us. That’s why it’s a comfort to go hand in hand.” ~Emily Kimbrough

Even though it was 18 months ago, I still remember my climb up Kilimanjaro like it was yesterday.

Taking those final steps toward the summit with tears in my eyes because I never believed that I—someone who grew up this sick little kid who held a deep-seated belief that she’d never be “an athlete”—would do something that thousands each year, including world-class athletes, cannot.

Yet there I was.

But I certainly didn’t get there alone. I had help—a lot of it.

While training, I called on my friends who are athletes and coaches to ask their training and recovery advice.

For example, when I got ambitious on a hike and was so sore the next day I had to crawl up and down the stairs on my hands and knees, I called my Ironman Triathlete friend Shannon to ask him how to avoid having that happen again. (His answer was twofold: He first told me not to do that again, and then patiently walked me through the wild world of sport recovery drinks.)

As I continued preparations, I continued to turn to my friends, the climbing company, and seasoned climbing veterans for buying and renting gear, figuring out snacks on the trip, understanding the challenges of altitude sickness, and everything else that went into making Kilimanjaro a memorable and easy trip for me.

The phrase “it takes a village” certainly applied to me and this trip.

Then, when I got there, it was my turn to pay it back. I was climbing with some older gentlemen who were having difficulty navigating the rocks and tree roots. So, I’d patiently reach down and offer a hand—after all, we were there together, to accomplish this together. I wanted to both pay it forward and see them succeed.

On the summit day it was my turn to get help again.

At altitudes above 10,000 feet you feel the effects of altitude sickness, and on our summit day we were traveling between 15,000 and 19,340 feet—meaning at the summit I had half of the oxygen I would at sea level.

Hiking up a 45-degree scree-covered slope with half the air I normally had was making the final ascent a challenge, but I had a wonderfully patient guide who would listen to my breathing as I puffed along behind him; and he and the summit team would stop for me, let me catch my breath, and then patiently move forward only once I was ready.

Then all of the sudden there it was—the summit—both literal and metaphorical. I had put in months of physical training and a year of research and planning to make it happen, and finally it was a reality. But I never could have done it alone.

In the days and weeks after my summit I cried—a lot.

Accomplishing something that seemed so out of reach forced me to fundamentally change my beliefs about who I am. And to me, that is a huge part of the power of not going it alone: You become better than you ever believed possible.

The Power of Community

Here are 6 powerful reasons not to go it alone:

1. Collective wisdom. No one person ever has all of the answers, and regardless of the amount of Google-fu you may have, consulting with experts is always going to give you better information.

2. Pushing our limits. When working alone, it’s oftentimes too easy to give up when things get hard. By surrounding yourself with others working toward a similar goal or objective, you’ll get motivation, support, and friendly competition to push yourself just a bit further than you would have done on your own.

3. Support and belief. Some days those big goals just seem impossible. On those days when you most want to give up, you need to lean on your community the most. They believe in you—probably more than you belief in yourself.

4. New ideas. I truly believe that when you are working within a community of like-minded people that the wisdom of crowds is considerably greater than any one person working alone. Our divergent world views and lenses mean that we all approach the exact same problem slightly differently.

5. Borrowed motivation. Even on those days when your belief in yourself isn’t waning, doing what needs to get done can seem overwhelming. Look around your community and be inspired!

6. Accountability. If you’re an uber-responsible person, you may not want to admit to people you care about who are pulling for you that something didn’t get done. There’s nothing like having to be accountable to others to up your game.

Allowing others to help is hard, but it ultimately raises everyone’s game, and suddenly that summit isn’t nearly so far off.

Question of the day - Is it easy for you to rely on people?

Is it easy for you to rely on people?