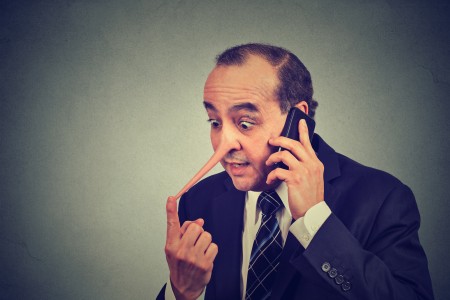 Lying can destroy relationships, whether between a child and parent or between a wife and a husband. It can ruin trust and intimacy and foster resentment. Many times, the people who feel deceived will cut ties completely with the person they believe lied.

Unfortunately, borderline personality disorder (BPD) is not a well-known or well-understood disease. Even so, many people believe lying is part of the disorder. However, you may be surprised to learn that the link between BPD and deceit is not so clearly defined.

In fact, if you review the symptoms of borderline personality disorder (BPD), lying is nowhere to be found. In the Diagnostic and Statistical Manual of Mental Illnesses-5th edition, which is the standard source healthcare providers use to make appropriate diagnoses, deceit is not part of BPD's diagnostic criteria.

However, that doesn't necessarily mean that those with BPD do not lie or that they aren't more likely to lie. In fact, many family members and friends of those with BPD cite lying as a major concern in their relationship with their BPD loved one.

Why Lying Occurs in BPD

There are a few potential reasons as to why lying may occur in people with BPD.

People with BPD feel incredibly intense emotions. These feelings can be so intense that they cloud the individual's thinking, making them view things through an emotional lens that may be different from how other people see it.

They look for details that confirm what they feel and ignore facts that will contradict them, and this can be incredibly frustrating for friends and family members. It's important to understand that the person with BPD isn't consciously lying—he truly believes his viewpoint is correct even when it's blatantly false.

BPD is also associated with impulsivity, the tendency to do things without thinking about the consequences—so some instances of lying may be the result of a person with BPD just not thinking before giving a response.

In addition, people with BPD often experience deep and entrenched shame, so lying may be one way to conceal mistakes or weaknesses that increase shameful feelings. People with BPD are often also very sensitive to rejection, so one function of lying could be to “cover up” mistakes so that others will not reject them.

Based on a sophisticated imaging technique called functional magnetic resonance imaging (fMRI), researchers have found that deception is linked to activation of the prefrontal cortex, which lies at the very front of the brain. The prefrontal cortex plays an important part in determining a person's personality, planning cognitive tasks, and regulating social and emotional behavior.

Interestingly, this activation of the prefrontal cortex has been found to occur whether the deception is related to emotional or neutral deception (for example, lying about something to avoid a negative reaction or out of fear versus lying about what you ate for breakfast). However, the basis of the lying, like whether the lying is meant to help or harm the person doing the lying, may affect whether other regions of the brain are affected.

Lying and the Impact on Relationships

No matter why a person with BPD lies, whether it's because he truly thinks his skewed worldview is correct or if he's feeling ashamed, the impact on relationships can be extremely detrimental. Friends and family members may no longer trust the person, isolating them away from their loved one.

Finally, lying can destroy relationships completely. Even loving and devoted family members may feel they have to separate from their loved one if lying has become common. This can eliminate an essential support system and harm both people.

A Word From Verywell

In the end, it can be difficult to maintain a relationship with a friend or family member with BPD. However, it's important to understand that people with BPD often engage in destructive behaviors not because they intend to hurt you but because their suffering is so intense they feel they have no other way to survive.

Lying may be one example of this. While that doesn't excuse the behavior, if you understand the cause, you can help your loved one get appropriate therapy to help manage their symptoms of BPD.

How You Can Buy Best Organic Mattress