The Future of Television, Past and Present 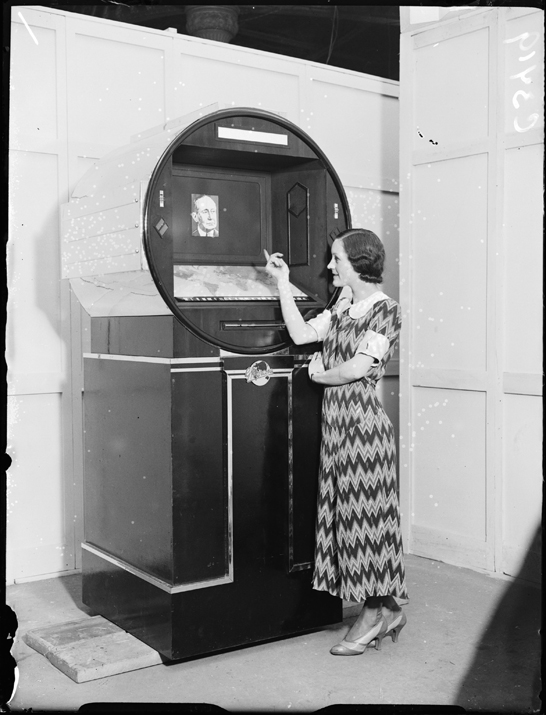 Iain Logie Baird looks through our collection to find out what it can tell us about past predictions of the future of television, and what those predictions might mean now.

A peek at our collection can help us understand past perceptions of the future of television. Looking back, we can judge how accurate the television experts of their day were in predicting what television would look like in the future.

Now that so many years have passed, what can their predictions tell us about what the future of television might still become?

Television, first called ‘seeing by wireless’, is a technology which has been with us now for over 80 years. Even so, it has never really lost its element of science fiction. With artists’ conceptions and prototypes resembling something out of Dan Dare or Flash Gordon, the magical effect television has to traverse distance and time compelled many to portray it as an object of fantasy, even when television had become a reality.

‘The Radio Set of 1960’ was exhibited at the Radio Show at Olympia in 1933. The set, designed by the Marconi company, contained both a television set and a radio, and was operated by speaking into a microphone.

In the early 1930s, what the medium of television would be—exactly—was still very much up for debate. A high-definition ‘standard’ for television had yet to be agreed upon. Would the image have 180 lines of detail, 240 lines, more? How big would screens need to be? What type of transmitter network could successfully deliver television to the nation in the same way as radio?

Most people considered television to be an extension of radio, which was already well-established.

By 1933, the BBC had already been broadcasting for a decade and most British households had some kind of radio set. The cinema was similarly well-established and would also have an influence on public expectations of what television would be. Like ‘Wireless’ which implicitly referred to radio’s predecessor, the Telegraph, words such as ‘Tele-talkies’ and ‘Radio-movies’ were used to describe television at first.

Most experts were predicting that television would more closely resemble its broadcast cousin, radio, rather than its visual cousin, cinema. This was soon proven true, largely due to television’s ability to broadcast instantaneously into many households at once, a power which it shares with radio.

IS THE FUTURE 3D?

Public enthusiasm for 3D has, as most of us know, come and gone a few times in film and also in television. The latest spike of interest was about three years ago after the success of James Cameron’s Avatar. At this time, I was hearing a lot of discussion in the industry about whether 3D television was ‘the future’.

It seems that 3D was a technology that television manufacturers wanted to sell a lot more than anyone wanted to buy. In 2010, we held a series of exhibitions, displays and conferences, but despite substantial cooling off since then—including the shutting down of 3D channels, due to digital technology—3D has claimed a small yet permanent niche in television. The main limiting factors continue to be the public distaste for glasses, and the fact that 3D television programmes are significantly more expensive and difficult to make.

In 1986, the famous early television and film producer Dallas Bower visited us and was interviewed for the opening of our first television galleries. Bower had considered ambitious 3D displays fifty years earlier in his 1936 book Plan for Cinema. He wrote:

“If we think in terms of a solid arena theatre, yes. But why not a solid cinema? Is it not within the bounds of possibility the cinematograph deus ex machina might evolve to this end? What, in short, might well be called a spatial re-creation of actuality.” At the Pye Ltd. Radio, TV and Electronic Exhibition at the Royal Festival Hall in London, 1960. It was described as “the sort of television which may possibly be in use in 50 years time”.

Dallas Bower was not the only person to dream of this type of display, and Pye Ltd. even made a mock-up of such a television for an exhibition in 1960.

Today, technology already exists that could bring us this future. Therefore, a term we may find ourselves getting familiar with in a few years is ‘volumetric imaging’.

In these systems, 3D images are projected onto some kind of semi-reflective material or rapidly moving surface, rather than onto a flat screen, thus eliminating the need for special glasses. This would be the end of the flat screen as we know it, and a new display something like a very large crystal ball.

The humble television set has always been engaged in a dialogue with its surroundings, which in most cases have been our living rooms. TV sets have been designed in all shapes and sizes, and today we find sets in an even wider array of forms thanks to the elimination of the necessity for a glass cathode-ray tube, or picture tube.

Almost any design more than about 8 years old embodied a creative way of working within the bounds of picture tube screen technology—at the core of almost every television set made since 1936. New flexible flat panel technologies mean television displays can be built into a pair of glasses or onto a T-shirt. TELEVISION IN THE HOME

The television set 10 or 20 years from now will deliver even more detailed, lifelike images due to better contrast ratio, more efficient video compression (which makes motion more realistic), an even larger average screen size, and of course, higher resolution.

In fact, it is probable that Ultra HD television will become available in the UK in the next 20 years or so, and with the arrival of this we will see screen sizes increase specifically to exploit the detail.

These sets will not change very much in general appearance from what they look like now. Because of increasing screen sizes, there is already a trend towards attaching or building the screens into furniture or recessing them into a wall; and this trend is bound to become more widespread. The designer of this television predicted that a set of 1971 might be an ultra-slim receiver, which could be converted in a coffee table.

THE ROLE OF THE VIEWER

Ultimately, the goal of television is to create the illusion of taking us to another place – so that it seems is as if we are really there witnessing a story unfold. Dallas Bower called it a “psychologically ideal theatre”.

But to be so completely immersed in programmes is not always the desired experience for the user. This is why we do not all own the all-singing all-dancing home theatres which are already available.

We can also question the value of the new Ultra High-Definition television systems which are presently receiving the most attention from the industry, offering pixel counts and screen sizes well beyond the present top-of-the-line full-HD (1080p) sets.

Only a few among us truly seek the high-definition experience, ‘the best that technology can bring’. Home theatres have been available for years, but how many of us actually own one?

How to be a miracle worker: Gabrielle Bernstein at TEDxFiDiWomen