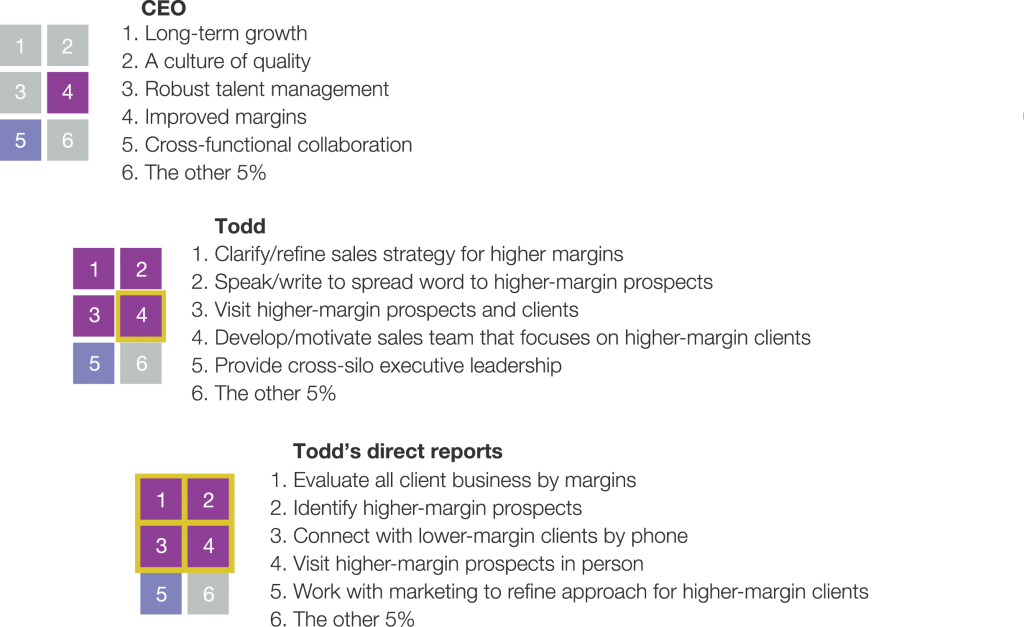 Improving the fit between the priorities of managers, their direct reports, and their supervisors—all the way up to the CEO—is a good place to start.

The biggest and most destructive myth in time management is that you can get everything done if only you follow the right system, use the right to-do list, or process your tasks in the right way. That’s a mistake. We live in a time when the uninterrupted stream of information and communication, combined with our unceasing accessibility, means that we could work every single hour of the day and night and still not keep up. For that reason, choosing what we are going to ignore may well represent the most important, most strategic time-management decision of all.

To illustrate, let’s look at the experiences of Todd,1the head of sales in a large financial-services firm and a direct report to the CEO. Todd had been struggling to change the way people approached the sales process. He wanted more measurement. He wanted people to target prospects that were more likely to bring in higher margins. He wanted people to be more strategic about which prospects to visit versus which simply to call. Finally, he wanted them to be more courageous about pursuing “stretch” prospects where the odds of success were low but the rewards would be high—and more willing to ignore prospects whose accounts weren’t likely to be particularly profitable.

“I’ve told them all this multiple times,” Todd said. “I’ve even sat them through a long training. But their behavior isn’t changing. They’re still selling the same old way to the same old prospects.”

Todd’s salespeople knew what he wanted from them and were able to do it. They also weren’t lazy; they were working long hours and were working hard. Rather, the problem was that Todd’s salespeople thought they could do it all. That’s why they resisted segmenting their markets or measuring the potential of each prospect before planning a visit: they didn’t want to miss any opportunities. Yet because their time was limited, they ended up missing some of the best.

If this problem bedevils salespeople in organizations like Todd’s, imagine its impact on senior executives. The scope, complexity, and ambiguity of senior leaders’ roles not only create near-infinite permutations of priorities but also make it more difficult to get real-time performance or productivity feedback. Is it any wonder that only 52 percent of 1,500 executives McKinsey surveyed said that the way they spent their time largely matched their organizations’ strategic priorities? (For more on this research, see “Making time management the organization’s priority.”)

We don’t often place organizational problems (such as weak alignment between the priorities of a company’s strategy or poor collaboration among the senior team) in the domain of time management, which is generally seen as an issue for individuals. To meddle with someone’s to-do list or calendar feels like micromanaging. In addition, time management seems too simplistic a solution to a complex organizational challenge.

But in this case, the simplest solution may be the most powerful because most behavior-change challenges are simply about how people are spending their time. That’s precisely where individual time management and organizational time management need to intersect. The question is how. Here’s a straightforward approach.

As an example, Todd’s five things might include the following:

Your five things form the structure of your to-do list. Divide a piece of paper into six boxes, five labeled with one of your areas of focus and the sixth labeled “the other 5 percent.” That other-5-percent box is like sugar—a little might be OK, but no more than 5 percent of your day should involve activities that don’t fit into your five areas of annual focus.

Once you’ve defined your six boxes, populate them with the tasks from your overflowing to-do list. If there are tasks—and there will be—that don’t fit into one of your areas of focus, put them in the other-5-percent box. When I first started using a six-box to-do list, half of my tasks fell outside my top five. That changed within a day of using this to-do list as I learned to dismiss and delete the things that were distracting me from my strategic focus. (Of course, if the other-5-percent box is filled with mission-critical tasks that can’t be deleted and will take more than a few hours a week, that suggests your top-five priorities may not be right—a valuable realization.)

Step two: once you’ve created your own six-box to-do list, help each of your direct reports create his or hers. This is where alignment—not just of strategies but of actions—takes place. Each of your employees’ top-five things should come out of your top five. Your top five should come from your supervisor’s top five and so on, with every person’s top five ultimately traceable back to the CEO’s.

Clarifying priorities for daily action at the most senior levels of the organization is particularly important precisely because the most senior jobs are often the most complex and scattered. Ultimately, the CEO is responsible for everything that happens in the organization. But focusing on everything is a surefire way to accomplish nothing. So it is the job of the CEO—together with the board of directors—to identify just a few things that will take the highest priority for the entire organization.

In Todd’s case, his CEO had identified higher margins as one of his own top five. So Todd—who, remember, reported directly to the CEO—focused his top five on that. And Todd’s direct reports listed their own top five in line with Todd’s (exhibit).

Step three: use these to-do lists to manage your employees more closely, without micromanaging. In one quick glance, you can look at their priorities, as well as the actions that they’re taking to move those top-five areas of focus forward. If they’re doing the wrong things, you can spot that immediately and guide them appropriately. And if they’re doing the right things, you can acknowledge them for that and help them succeed.

The power of this process lies in its simplicity and its concreteness. These are not top-five goals or top-five objectives. They form the structure of each person’s to-do list and translate, directly, into time spent on the job—which is the difference between getting something done versus simply declaring its importance.

In short, “management by six-box to-do list” encourages organizational transparency and strategic alignment. It also empowers executives, managers, and employees alike to push back when they’re asked to do too much work that distracts them from the areas of strategic focus. When people start doling out tasks that are not in the areas of focus, there’s a structure to bring the distraction into the open, to discuss it, and to make an intentional decision as to whether it’s worth accepting or resisting. This approach takes the normal goal-setting process one step further, creating a much higher likelihood of follow through. Each day, managers and employees are connecting their day-to-day tasks with the organization’s priorities.

This is particularly useful in matrixed organizations, where people often have multiple dotted-line relationships to multiple managers, and in global organizations with cross-border lines of command that can be convoluted, resulting in friction between regional priorities, local management, and business-unit prerogatives.2In such instances, confusion increases, along with the complexity of the management structure. All managers believe that their priorities should take precedence. Tensions rise, along with passive-aggressive resistance and plain old procrastination due to overwhelming work demands.

The six-box to-do list clarifies this confusion by putting everything on paper and ensuring alignment—not just top down, but across the hierarchy as well. Each employee has her own six boxes—and if one dotted-line manager wants her to focus on something outside her top five, that becomes immediately evident and gets resolved at the level where it should get resolved: between the managers themselves.

Many organizations use MBOs (management by objectives), but those objectives are rarely looked at outside the annual performance review (or, in some cases, quarterly) and never translated into daily tasks. If a CEO is going to drive a strategy though an organization, the organization needs to build its daily actions around that strategy. Remember, the McKinsey survey found that only 52 percent of executives spent their time in ways that largely matched their organizations’ strategic priorities. The six-box to-do list should increase that percentage.

At first, when Todd started using the six-box to-do list, everyone got nervous. Some of the anxiety was about putting to-do lists on display. But after the first few days, that turned out to be a nonissue. The real source of discomfort was that Todd’s direct reports began to discard much of what they had previously planned to do.

It didn’t take long for them to gain confidence—and pleasure—in limiting their efforts to those most likely to pay off. That focus recently enabled one of Todd’s salespeople to make the largest, most profitable single sale that his division of the century-old company has ever made—without working weekends.

Abscess Tooth Treatment; When Do You Need It?