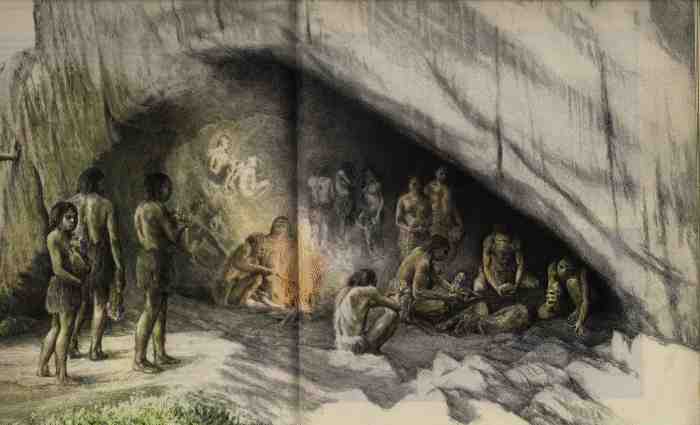 Dusk was beginning to settle. The ever-present wind carried a chill across the valley. It buffeted the limestone cliffs with fine particles of grit that it had picked up on its journey over the ice, which still covered the northern plain beyond the mountains. As it swirled around the mountainside, the wind cut across an opening in the face of the rock, but sheltered as it was, on the southern slope below the cliffs, the cave resisted the worst of the onslaught.

Inside, a series of small fires sputtered then grew bright as a gust of wind forced the chilled air into the mouth of the cave. The flames cast a reddish glow and a warmth on the bodies of those nearest them, but these things went unnoticed; it was not the fire that occupied the attention of those inside the cave.

The small band of people, a mixed group of 15 or so, stood gathered around the rough boundaries of a shallow pit that had been hollowed into the rocky floor at the center of the cave. Below the whistling of the wind as it cut across the entrance-way, a woman softly chanted and gesticulated, while she laid brightly colored flowers, springtime incarnations of the healing plants, across the lifeless body of a man.

The man had been father, son, brother. He had been a brave hunter who provided the people with meat and hides. Despite her knowledge of the properties of the plants she now laid upon his body, she could not heal him. He would be missed.

Finishing her ritual monologue, the woman laid the last of the flowers at the feet of the man. As she rose, members of the group came forward, each laying handfuls of earth over the flowers, tightly packing and sealing the body in its tomb. Solemnly, they made their way toward the communal fire at the front of the cave and the funeral feast that waited.

Outside, the wind continued to howl. The light radiating from the mouth of the cave flickered and grew dim. And the voices of the people faded to soft echos, and vanished in time.

Illustration of Neanderthals at Shanidar Cave from the
book, “Origins,” by Richard Leakey and Roger Lewin, 1977 (pp 126-127).