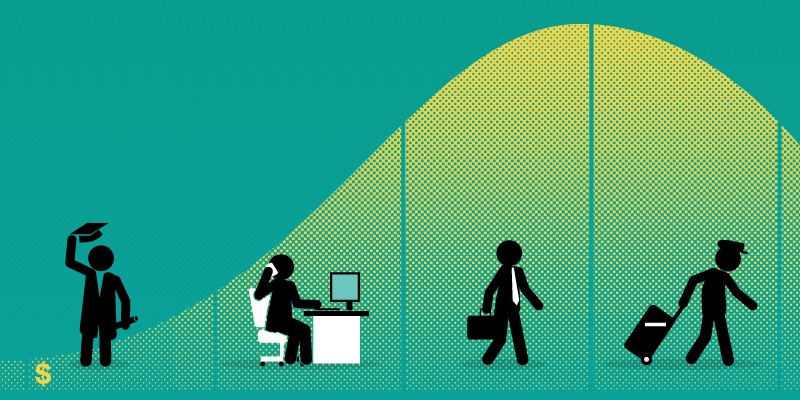 Specifically, we note that there has been a 17% decline in the Gini Coefficient (the most popular indicator of inequality) on Canadian net worth between 1970 and 2012. As well, both top decile share and top quintile share have declined over the same period, although by a smaller percentage. The fact that wealth inequality has not increased has led many in the social justice community to focus attention, rather, on the degree of wealth inequality. The fact that the top 20% of Canadians own about 67% of the wealth and the bottom 20% own none has been the subject of much attention and outrage.

Students of economics have long appreciated that, for most people, wealth has a predictable age pattern. The Life-Cycle Hypothesis developed in the 1950s by Modigliani and Brumberg shows that income, consumption, saving, and wealth accumulation change with age because of the natural rhythms of education, work, marriage and family formation, pension saving, and retirement. This means that, even if everyone was identical, there would be substantial wealth inequality because, at any point in time, we have people at different points in their life cycle. Of course, everyone is not identical and there are differences in wealth that are not due to age. The critical point here is that life-cycle effects, alone, are capable of explaining most of the observed wealth inequality in Canada.

Reasons for differences in wealth that are not related to the life-cycle effect would include skill differentials (and all of the personal characteristics that lie behind those differences); preferences and choices; luck (which would include inheritances); and institutional and policy considerations. The latter point refers to any institution, regulation, or policy that constrains (in an important way) the ability or incentive for upward mobility.

There is much heat and fury about wealth inequality. This publication addresses the popular perception and finds that much of the concern is misplaced. The fact that the bottom 20% have no wealth is not surprising and is unworthy of the passion devoted to it. Many of those in the bottom wealth quintile are young and have not yet had an opportunity to accumulate any wealth. Many people with no wealth in their twenties will be in the top wealth quintile (or even top decile) by the time they retire. The paper suggests that attention could be appropriately diverted towards the issues of poverty (real deprivation) and barriers (including governmental) to upward mobility.

The science of laughter

What makes a good life? Lessons from the longest study on happiness | Robert Waldinger