The Importance of Etiquette 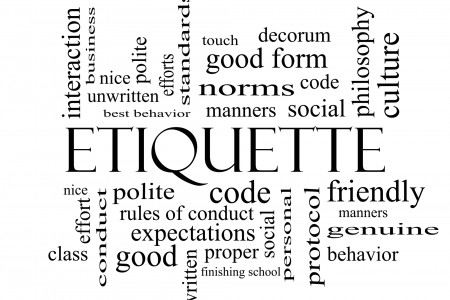 Some people argue that etiquette no longer matters, that the rules for good behavior are old-fashioned and out of date. However, good behavior and manners are never out of style. Etiquette, like all other cultural behaviors, evolves to match the times. Without etiquette, members of society would show far too much impatience and disrespect for one another, which would lead to insults, dishonesty, cheating, road rage, fist fights, and a rash of other unfortunate incidents.

Etiquette is merely a set of guidelines for politeness and good manners, the kindnesses with which we should always treat each other. It will always matter!
What Is Etiquette?

Etiquette, the complex network of rules that govern good behavior and our social and business interactions, is always evolving and changing as society changes. It reflects our cultural norms, generally accepted ethical codes, and the rules of various groups we belong to.

It helps us show respect and consideration to others and makes others glad that we are with them. Without proper manners and etiquette, the customs of polite society would soon disappear and we would act more like animals and less like people. Aggressiveness and an "every man for himself" attitude would take the lead.

In earlier times, the rules of etiquette were used for two purposes: to remind people of their own status within society and to reinforce certain restrictions on individuals within that society.

In the Middle Ages and the Renaissance, for instance, etiquette dictated everything from how low a person of inferior rank had to bow to a person of higher rank to how long a man had to spend courting a woman before the two could marry.

Even the way a person mourned was strictly outlined by rules of etiquette until as recently as the Civil War era in the United States. Widows then were expected to dress in "widow's weeds," or completely black clothing and veils, for a full year after the death of a husband.

These types of rules in earlier society were usually determined by the ruling classes because they served the purpose of making them more secure in their roles as the rulers of society. By far, the most strenuously enforced rules of etiquette were tied to how one showed respect for the king and his highest ranking officials, such as dukes and princes. It reinforced their authority.

The rules of etiquette concerning marriage, mourning, and other major events of life largely applied only to the ruling classes or the wealthy. Peasants and workers, as long as they followed the rules of etiquette pertaining to respecting their superiors, were not expected to follow formalized rules of courtship; they tended to base their own "rules" of courtship on good manners and common sense.

Over the centuries, as society has become more democratic, etiquette has become an excellent combination of good manners, common sense, and rules of conduct that reflect cultural norms and the rules of our society as a whole rather than just one distinct group within it. It has less to do with the fashion of the moment or who is in power and more to do with putting others at ease and an ethical code of conduct.

Reasons to decorate the house with vinyl murals