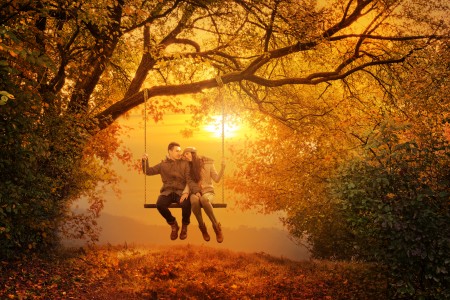 “Sometimes the only closure you need is the understanding that you deserve better.” ~Trent Shelton

It was a classic San Francisco day. The sky was a perfect cerulean blue. The sun sparkled brightly.

I ventured from my apartment in the Haight to Duboce Park to enjoy the Saturday. Dogs chased balls in the dog park. Friends congregated on the little hill. They giggled, listened to music, and ate picnic food. Kites flew high in the breeze. Adults tossed Frisbees in their t-shirts and bare feet.

And I sat, bundled up in my scarf, zippered fall jacket, warm wool socks, and cable-knit sweater.

This was summer in San Francisco. I had recently moved to the city at the end of May from the east coast with steamy eighty-degree weather, and now in July I sat on a hill and shivered. The famous saying fit perfectly, “The coldest winter I ever spent was the summer I spent in San Francisco.”

I decided to venture to a nearby café, a French café called Café du Soleil (The Café of the Sun) and warm up with a hot beverage. I loved their outdoor seating.

When I arrived, the café was packed. Every seat in the patio and the whole place was taken, except for one free stool at the bar next to a tall, handsome man.

I sat down next to him with my hot chocolate and commented on how crowded the café was. He smiled and agreed, no longer interested in his salad or his glass of white wine. He was interested in me instead. His eyes sparkled.

He was an artist, a photographer. He was a creative like me. Recently, he purchased his first house in Oakland, which included a lovely garden and was close to his work at a fine Japanese restaurant. Our conversation flowed easily, but from the moment I met him, I noticed a dark cloud over his head.

“Are you married?” I asked.

He jiggled his left fingers to show an empty hand.

Our eyes locked. He sighed.

I pressed my lips.

“Oh, I think you’ll have kids one day,” I said in a lulling voice, looking sweetly into his eyes.

He melted. He really saw me. His eyes were full of adoration, love, and awe.

We started dating immediately. It was fun and easy. He came to see me perform in Berkeley and I visited him in Oakland (in Fruitvale where he lived), where it was warmer and sunnier. He cooked me meals at his home with fresh fish and vegetables from his garden.

Hummingbirds danced in the air when we were together. We drove to romantic rendezvous, danced, and he introduced me to the important people in his life: his best friend and his boss.

The more time we spent together the sunnier and brighter he became, the happier we both were.

Later, he admitted that he actually made most of his money selling drugs, followed by bartending, and that photography was only a hobby, not a profession. Also, he confessed that he had an alcohol and drug addiction. This was the reason his previous relationship ended even though they were both in love.

I became sober before I moved to California. I overlooked the red flags because of our remarkable chemistry. Since I didn’t drink, he only drank one glass of wine with me at dinner and didn’t seem to want another. Because I didn’t do drugs, he never did drugs around me and he never talked about missing them.

Everything was going perfectly, or so I thought. We never fought. Then Malik took his annual vacation to an event called Burning Man in Nevada while I stayed in San Francisco looking for a new apartment. Burning Man was very popular among the San Francisco locals and I was intrigued, but my sublet was up and I had to find a new place fast.

Described as the “biggest party on earth” or “the only place where you can truly be yourself without judgment,” Burning Man was where people could party all day and night, dress up in outrageous costumes, see fantastic art and performances, and be completely uninhibited.

When Malik returned from Burning Man, the storm cloud over his head reconvened above him and overshadowed him. He was jittery and paranoid. In fact, I didn’t recognize him; he became distorted and ugly. His eyes were glassy and darted back and forth like Gollum in The Hobbit. Hunched over, he tapped his fingers incessantly.

“Everything happened too fast,” he blurted. “I told you, I don’t want to fall. I just wanted to have fun. I didn’t want to fall. I can’t sustain a relationship longer than two years. You want more than that. You should have kids. You’re getting older. You’d be a great mother. You need to have kids while you still can. You deserve that. You’re beautiful. There are plenty of handsome men in San Francisco. Why would you pick me? Pick one of them!”

“Malik… we are having fun. I won’t let you fall. Let’s glide. Why are you talking about marriage and kids?”

“We’ve never talked about the future.”

“Why are you breaking up with me? It makes no sense. Things were good before you left. We never fought. You were only gone a week. You mentioned having fun with a girl. Did you meet someone else?”

His jaw hung open; his eyes bugged, and he took a large melodramatic step backward and gasped. He was shocked by my directness and accusation. But perhaps he was also stunned by my keen intuition.

Sure enough, over the magical week, he met a beautiful redhead from Arizona, a single mother, who was interested in doing drugs with him in the desert, to escape her demons.

They had so much fun together, isolated in a made-up city, laughing in the temptress of the sweltering heat. They experimented with Molly on the floor of his tent and “died together.” Like Romeo and Juliet.

I was devastated. Malik was no longer the person I thought he was. I had envisioned a life together. I had imagined traveling the world together.

He told me he didn’t want me to text him any longer, and I didn’t. But the pain seared inside of me. and I held on for hope that he would see his faults and come back to me. How would he maintain a long-distance relationship with someone he did drugs with in the desert for a week? It made no sense. But that was how much he valued drugs over me.

I never felt closure. I never felt that I was able to express all of my feelings. I wondered if I had been more vulnerable with him, if he knew how much I cared, if he would have had second thoughts and returned to me. He never came back. He never texted. It took me a long time to let him go. He was a big love for me.

I felt it deep in my heart. I had met a soulmate. There was no denying it. Even though it didn’t work out, he opened my heart to love.

I didn’t understand it at the time, but now I know that you can’t help anyone get over drug addiction. They have to want it for themselves.

Don’t cling in a relationship and don’t cling once it’s over for it to return. This was a hard lesson for me because when I love, I love hard.

I have learned if you love someone and they cannot commit, do not hold on. If you love someone and they don’t want to be in a relationship with you, don’t think that in time, they will come to their senses and see how great you were and regret it and come back apologetically. People sometimes move on fast. Set them free. Holding on only hurts you. Allow yourself some peace too.

A relationship without honesty is not a deep relationship. One shouldn’t have to drag it out of someone that they are dating someone else or that they have a drug addiction.

5. Be with someone who has the same vision of the future.

Meeting Malik opened my heart. Even though our time together was brief, it changed me forever. After overcoming the grief of losing a soulmate, it taught me not to settle, that I deserve better, and to trust that I will experience an even greater love next time.

Khristee Rich is a healer and spiritual teacher who helps empathic women and creatives to feel joyful and prioritize their dreams, talents, and wellness so that they can live an extraordinary life. With her unique Reiki/shamanism blend and skills being clairvoyant, psychic, a medium, and an empath, she inspires and empowers women to heal, dream big and shine. Visit thedancingcurtain.com/blog/ and claim your free gift here.

Should I Take Steroids ? For Beginners

How To Gain Muscle w/out Steroids ! | Beginners + Teens