What Does the Bible Say About the Right to Bear Arms? 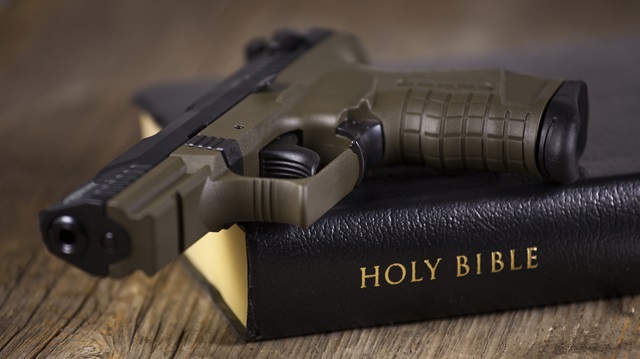 Should A Christian Practice Self-Defense?

The Second Amendment to the United States Constitution reads: “A well regulated Militia, being necessary to the security of a free State, the right of the people to keep and bear Arms, shall not be infringed.”


In light of recent mass shootings, however, this right of the people to keep and bear arms has come under heavy fire and heated debate.


Oddly enough, at the same time, national background checks for retail firearm sales (which are performed every time someone buys a gun at a gun shop) have surged to new heights. Ammunition sales are also setting records as states report dramatic increases in the number of concealed-carry licenses being issued.


Despite the apparent desire for more gun control, the firearms industry is booming.


So, what are the concerns for Christians in this debate over stricter gun laws? Does the Bible say anything about the right to bear arms?

According to conservative leader and Wall Builders founder David Barton, the original intent of the Founding Fathers when writing the Second Amendment was to guarantee citizens “the biblical right of self-defense.”


Richard Henry Lee (1732–1794), a signer of the Declaration of Independence who helped frame the Second Amendment in the First Congress, wrote, “… to preserve liberty, it is essential that the whole body of the people always possess arms, and be taught alike, especially when young, how to use them…”


Obviously, the Bible does not specifically address the issue of gun control, since firearms like we use today were not manufactured in ancient times. But accounts of warfare and the use of weaponry, such as swords, spears, bows and arrows, darts and slings were well-documented in the pages of the Bible.


As I began researching biblical perspectives on the right to bear arms, I decided to speak with Mike Wilsbach, the manager of security at my church. Wilsbach is a retired combat veteran who also teaches personal defense classes. “To me the Bible couldn’t be clearer on the right, even the duty, we have as believers to self-defense,” said Wilsbach.


He reminded me that in the Old Testament “the Israelites were expected to have their own personal weapons. Every man would be summoned to arms when the nation confronted an enemy. They didn’t send in the Marines. The people defended themselves.”


So, each man had a sword ready to be holstered and used when required.


And in Psalm 144:1, David wrote: “Blessed be the Lord, my rock, who trains my hands for war, and my fingers for battle…”


Besides instruments of warfare, weapons were used in the Bible for the purpose of self-defense; nowhere in Scripture is this forbidden.


In the Old Testament, we find this example of God sanctioning self-defense:


“If a thief is caught in the act of breaking into a house and is struck and killed in the process, the person who killed the thief is not guilty of murder.” (Exodus 22:2, NLT)


In the New Testament, Jesus sanctioned the use of weapons for self-defense. While giving his farewell discourse to the disciples before going to the cross, he instructed the apostles to purchase side arms to carry for self-protection. He was preparing them for the extreme opposition and persecution they would face in future missions:


And he said to them, “When I sent you out with no moneybag or knapsack or sandals, did you lack anything?” They said, “Nothing.” He said to them, “But now let the one who has a moneybag take it, and likewise a knapsack. And let the one who has no sword sell his cloak and buy one. For I tell you that this Scripture must be fulfilled in me: ‘And he was numbered with the transgressors.’ For what is written about me has its fulfillment.” And they said, “Look, Lord, here are two swords.” And he said to them, “It is enough.” (Luke 22:35-38, ESV)


Conversely, as soldiers seized Jesus at his arrest, our Lord warned Peter (in Matthew 26:52-54 and John 18:11) to put away his sword: “For all who take the sword will perish by the sword.”


Some scholars believe this statement was a call to Christian pacifism, while others understand it simply to mean in a general sense that “violence breeds more violence.”

The Benefits of Blockchain Applications- Exploring Steps to Develop One

How to Choose Faucets for Your Renovation the Best Way