How to Get Through Your Darkest Days: Lessons from Addiction and Loss 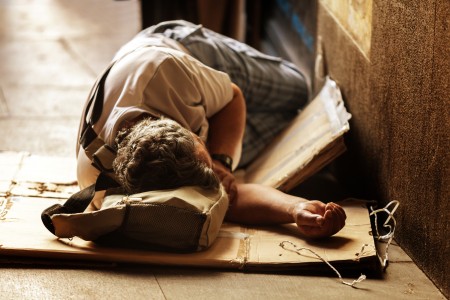 How to Get Through Your Darkest Days: Lessons from Addiction and Loss

“You are never stronger…than when you land on the other side of despair.” ~Zadie Smith

In the last years of my twenties, my life completely fell apart.

I’d moved to Hollywood to become an actor, but after a few years in Tinsel Town things weren’t panning out the way I hoped. My crippling anxiety kept me from going on auditions, extreme insecurity led to binge eating nearly every night, and an inability to truly be myself translated to a flock of fair-weather friends.

As the decade wound to a close, I stumbled upon the final deadly ingredient in my toxic lifestyle: opiates. A few small pills prescribed for pain unlocked a part of my brain I didn’t know existed: a calm, confident, and numb version of myself that seemed way more manageable than the over-thinking mind-chatter I was used to.

At first the pills were like a casual indulgence—I’d pop a few before a nerve-wracking audition or first date, the same way other people might have a few drinks before going out on the town. But my casual relationship to opiates was short-lived: soon the pills were no longer reserved for awkward dates or nerve-wracking auditions, and instead necessary for any type of outing or interaction.

I knew I’d crossed an invisible line when I began to feel sick without a “dose” of medication. The physical pain they’d been prescribed for had long subsided, but they’d created a need that only grew with more use. Soon I became sick if I didn’t take any pills, which is when I began going to any lengths to get more.

I wanted so much to stop but felt trapped on a terrible ride: I’d wake hating myself for what I’d done the day before, and with deep shame I’d vow earnestly to quit—then afternoon would come and with it, withdrawal symptoms. As my stomach would turn and my head would spin, I’d lose the resolve to stop and begin searching for my next fix. With that fix would come a few hours of relief, followed by another cycle of self-loathing, a vow to quit, and more failure.

It was a spin cycle that likely would have killed me had life not intervened in ways that at the time felt devastating; in a span of two weeks my “normal” façade collapsed and, with it, most pillars in my life. Like a house of cards toppling, I lost my job, car, relationship, and was evicted from my home.

It felt like a cliché country song where the singer loses everything, except in those songs that person is usually likeable and innocent—but in my story, I felt like the villain.

As I watched my entire life crumble around me, I felt no choice other than to return home and seek the shelter of the only person who had always been there for me—my mom.

The mom who had raised me with morals like honesty, accountability, and kindness, although I hadn’t been living them for a while. The mom who had struggled raising two kids alone, gotten us off food stamps by going to nursing school, and who watched helplessly as I descended into the same cycle of addiction that had taken the life of my father.

She told me I could stay if I was sober; I vowed to try, though I’d stopped believing my own promises long before.

In the recovery program I found soon after, there was an oft repeated saying on every wall: “it’s always darkest before the dawn.” If taken literally, it makes you think about how dark the night sky is before dawn breaks… how heavy, looming, and consuming. Before the light returns, it can feel like the darkness will never end.

That was how my early days sober felt.

But as I cobbled together a few weeks and then a few months, I began to feel the faintest bit of trust in myself. Through abstinence and therapy, mindfulness and a sober community, the hopelessness that had seemed so all-consuming began to crack open and let in some light.

I moved out into my own apartment, returned to school to complete a long-sought college degree, and had a waitressing job that I loved. Then, just after I achieved one year sober, I got a phone call from my brother that would change everything.

“Melissa, you need to come home,” he said, his voice thick with tears. “It’s mom.”

My stomach dropped as I gripped the phone, suddenly feeling about five years old. I’d find out later it was a heart attack.

I felt the darkness descend again.

In the days that followed her death I felt like a dependent child that was unable to care for myself. I dragged myself through brushing my teeth, dressing, and arranging her funeral; it felt like my heart had stopped along with hers.

The same thought kept circling the drain of my head—how can I live the rest of my life without my mother?

I couldn’t imagine not having her at my graduation, wedding, or when I became a parent. Her disappearance from my future brought up a dread much worse than that of the previous year— but as I began to settle into my grief, I realized I had a path through this moment, if I were willing to take it.

The tools I’d forged in sobriety would prove to be useful in the dark days that followed. I share them below as an offering for anyone who travels through a dark night of the soul: simple steps to keep in mind when you can’t see a path forward.

Take things one day at a time.

In sobriety, you learn that imagining your whole life without another drink or drug can be so daunting that you just give up and get loaded. So instead of borrowing future worry, you learn to stay in the week, the day, and the moment.

I didn’t have to know what having a wedding without my mother would be like—I just needed to eat breakfast. I didn’t need to imagine my graduation—I just needed to get myself through one more class. As I pieced my future together one moment at a time, I found that I could handle the emptiness in bite size pieces. I didn’t have to figure it all out—I just had to keep going.

Allow feelings to come and trust that they will go.

Much of what I’d been running from as an addict was the discomfort of my feelings. I didn’t want to feel rejection, so I contorted myself to be liked; I didn’t want to feel sadness, so I busied myself with the next activity. In recovery I learned that we can run from feelings all we want, but eventually they catch up to us in some form. Instead of running I’d learned to allow; instead of busying myself I’d been taught to turn toward pain and trust that it wouldn’t last forever.

Though this was easier said than done, some part of me knew that running from the grief of my mom’s death would only snowball into a freight train later. I’d scream in my car as I seethed with the unfairness of it all; I’d rock with sobs on my couch when the sadness became too much. It wasn’t pretty and it felt terrible, but when I let the grief shake through me. I found that there would always be an end… that at the bottom of my spiral a thread of mercy would appear, and I would be able to go on.

From a young age, I felt much more comfortable in a mask of smiles and jokes than sharing how I was actually doing at any given moment. Though getting sober had helped me shed layers of the mask, I still found myself trying to likeable, approved-of, and “good.” But as grief zapped my energy and ability to make myself palatable, when people asked how I was doing I started to be honest.

Sharing the pain I felt after my mom’s death was like standing naked in the middle of the street—I wasn’t used to crying in front of people and didn’t think they’d like me when they found out I wasn’t always “fun and easy going.” But it was exactly this type of vulnerability that allowed true friends to materialize, old connections to deepen, and the support I longed for to appear.

Allow yourself to be forever changed.

In recovery from addiction, I began to think of my sobriety date as a second birthday—the start of an actual new life. Though the way my former life had burned to the ground was painful, I welcomed the chance for a new start.

But when my mom died, I didn’t realize that losing her would again scatter me into a thousand unrecognizable pieces—pieces I kept trying to fit back together but weren’t ever going to be the same, because I wasn’t.

Once I allowed my life, relationships, and priorities to be changed by my grief, I found a self that was stronger, more resilient, and somehow more tender. I never would have chosen the form of this lesson, but I came through these experiences a more authentic version of myself… an overarching goal of my life.

It’s now been seven years since my mom’s death, and I’ve been sober for eight. As my journey continues to unfold, I never lose sight of how broken I once was and how dark things seemed. I also know that the struggles of life aren’t over; they’re part of being human and living a full life.

I just have to keep going.

Melissa Pennel is a writer, mother, and life coach living in Northern California. She is the author of the book Questions You’ll Wish You Asked: A Keepsake Journal for Mothers and Daughters, which stemmed from the grief of unexpectedly losing her mother before asking important questions. Find more of Melissa’s writing by subscribing to her blog or visiting Followyourfirecoaching.com.

Why Important Roller Skating For Beginners?

What Exactly Are Dental Crowns?

How to find the Perfect Outfit for Any Occasion

Why You Have To Visit Eg33my1 to Play Casino Games