History of Yachting in Asia 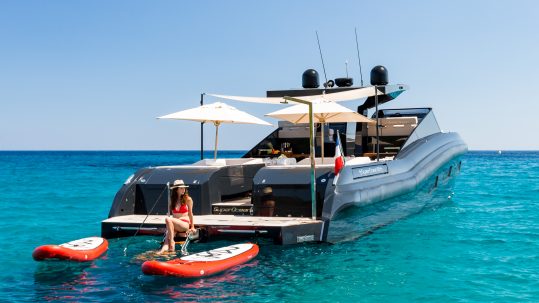 Dated as back as 16th century the Dutch used yachts mainly for short and fast journeys. Yachts derived from the Dutch term "Jacht" meaning "to hunt", the vessels were used by the navy to pursue pirates and other illegal activities on the sea, these vessels were classified as small and fast vessels. They were small enough to be handled by a small crew and big enough to accommodate the crew and to store supplies for a few months, therefore they also made the best explorers. They were also used as armed tenders during war time. Later they were reduced to play the role of courier tenders during war time as the warship technology became more advanced.

During the British civil war in 1642, Charles II was sent to a refuge island for safety, he soon fell in love with yachting which he did in his past time, and soon when he was re-instated as a king in 1660 he promoted yachting as a leisure and recreational activity in England. Soon the regattas (sailing races) started and the sport got deeply embedded into the western culture.

This is basically how yachting became a sport and a leisure activity as we know it in modern times. Eventually the rich and famous did the same to their boats as they did to their homes, clothing, horse carriages and later to their automobiles, since 1800s they made yachts grander and luxurious to display their wealth and status.

Western stock markets and the amount of wealthy individuals rose due to west colonizing the east, due to increase in trade such as spices, opium, precious metals, iron and steel manufacturing boom, rail road mania etc there was plenty of demand for luxury products and luxury yachting also became an organized industry.

Of course the concept of boats according to archeology has been there for over 100,000 years and there is evidence showing good engineering of boats in India, Egypt and China. India having archeological evidence of a slip way (a platform used to pull boats out of water) carved out of stones dating back to 2200 BC, and China's sailing junk boat designs with water tight bulkheads (compartments across the boat) going back to 200 BC. So it is believed that the basic concept of boat building and engineering went from east to west. Then developed in the west and came back to the east.

Anyways, the further we are in history the more debatable it is. When we get back to the recent history in Asia, the so called leisure yachting was introduced to British colonies such as Singapore, India, Hong Kong. The Royal yacht clubs were mainly designed for leisure and recreational activities of British army and officials. These clubs introduced the colonies to leisure yachting and eventually people understood and got the taste of owning luxury yachts.

In India this concept of owning luxury yachts did not take off well, mainly because British left India quite early in 1947, and India had volatile politics, religious and communal violence and soon was to be groped by corruption and some how in India there was this mentality of being poor as being honest. So not to raise any eyebrows and invite scrutiny from the government the elite did not indulge in luxury yachts. At least not in their own country.

Britain also loosened its control over Singapore around mid 1940s. However Singapore was a trading port and the government put a lot of effort in the country's education system, modernization, trade and economy, they clamped corruption eventually which existed heavily and it became one of the most prosperous countries in Asia. Heavy western influence, prosperity and modernization also paved way to luxury yachting, and boating industry stuck around. How ever it did not become a very huge industry due to Singapore being a small place and having limited infrastructure for cruising.

Hong Kong was kind of in the best position, mainly because a large part of its British colonization was in modern times. The people being used to freedom of speech and expression, high education level existed, although during world war 2 there was brief Japanese take over, but soon British got back in. The British culture stuck on, yachting was normal, luxury yachts had a market. Hong Kong's political system was fairly stable and much better for the economy after a corruption crackdown and set up of an independent anti corruption agency in 1972.

Hong Kong soon became a financial hub, because it was possible to do business for foreign companies due to its stable government system, law and order and its property markets as well as stock markets flourished. For luxury yachting, Hong Kong had excellent infrastructure of about 250 islands nearby, with Hong Kong being an international shipping port, lot of facilities such as break waters were provided by the government and safe moorings for private yachts as well.

Another advantage of Hong Kong was its people, Hong Kong had a large population of traditional fishermen, which were basically boat people, who lived on boats, knew the waters well, knew how to handle and operate and maintain boats. They had their traditional shipyard with slipways in place, which also were ideal to maintain modern large and small motor yachts. And soon, Hong kong had a professional supply of yacht crew, and maintenance shipyards and there was a whole industry built up around luxury boats. Mainly motor boats, because most locals did not like to do physical labor of sailing a boat.

Hong Kong was also influenced by American culture in its early days, from its movies to luxury products. Therefore even in leisure yachts there was plenty of American influence.

in 1900s American company Chris Craft started making affordable boats for middle class any by 1950s American boat builders were making fibreglass boats, which was a new affordable and easy to work with material.

Rise of manufacturing boats in Asia.

During 1970s America was still in war with Vietnam and soldiers were also stationed in Taiwan. Taiwan being surrounded by the ocean and with ancient history of manufacturing boats and ships was easily able to manufacture motor yachts and trawlers. It's said that the first motor yacht that Taiwan made for the west was ordered by an American soldier stationed there during the Vietnam war in 1970. Taiwan manufacturing of fiberglass yachts took off from there and custom made trawlers and motor yachts could be built. Taiwan was soon shelling out much cheaper motor yachts with decent quality hence creating a lot better value, and Taiwan exported almost 2000 yachts in 1987. Lot of Taiwanese boat buyers were also from Hong Kong and Singapore. Popular Taiwanese boats at that time resembled the famous Hatteras yachts and Bertram yachts of USA, but were available for fraction of the price.

British and Italians were also making modern fiberglass yachts around 1960s. Italians however were exquisite in their interior designs and craftsmanship and soon attracted the lovers of beauty. The difference between European, American manufacturers and Taiwanese manufacturers was that, the European and American manufacturers had a strong domestic market that was consuming their product, which funded their development and with extra backing of their boating culture they were able to more deeply understand and innovate their designs. After all, you can make a better product when you are also using it and you have available years of history of your product users in your back yard.

Taiwan did not have this luxury of using motor yachts or having a domestic market, mainly because lack of infrastructure of yachting and lack of regulations to promote or accommodate yachting to the general public.

Taiwan boats were some times known as inferior copy of western boats, and sometimes known as boats of great quality and value. Taiwan's main manufacturing was located in Kaohsiung (south west of Taiwan). The quality of the boats naturally depended on the manufacturers. However, Taiwan was making boats purely for exporting, and it could not loose its selling point, which was "cheaper price". Taiwan's main market was USA, and it was mainly up to the agents in USA or buyers to come and inspect and control the quality if they wanted a great product. But sometimes it also required higher prices. Basically, if the quality of the yacht was not up to the standard then the reason behind it was not always lack of expertise in manufacturing, but the customer demand of cheaper price. Taiwanese manufacturers in that way were very flexible and would accept the ideas from their customers to save the cost unlike their European counterparts who always made their yachts up to a certain standard and were less flexible with technical and structural changes.

Japan, also being quite influenced by the west, had started its yachting activities in late 1800s. Boating and yachting is also fairly popular in japan, as people do appreciate outdoor activities. However, the very luxury and modern yachts were not as popular.

Japan however, did import boats from US, some from Europe, and also started building their own outboard motors and small boats at around 1950 to 1960. Japan's pleasure boats mainly serve the domestic markets. Although their outboard engines are famous all around the world, the Japanese made boats are not as competitive, fashionable as the European boats.

Similar to Japan, Malaysia and Philippines also had their first yacht club started around 1927, and have been well influenced by pleasure boating by the west. In the late 1900s of course, the motor yacht culture started. However, In these countries it did not pick up too well, because of the country's political volatility and taxing issues. Malaysia, Philippines like most of Asia, is also faced with challenges that come with corruption, and many times if wealth is coming from unscrupulous means, it needs to be hidden and one cannot be too flamboyant with it to avoid scrutiny, especially when the majority of the population is battling poverty.

Of course lot of these Asian countries have always had a high tourism market, and the are famous for their use of speed boats, jetskis and water sports. But private yacht and motor yacht ownerships for leisure and luxury were less common compared to the western countries.

Ordinary Minutes When You Ought to Recruit Limousine

All you need to know about boat repair and maintenance services

The Best Motivations to Recruit Limousine