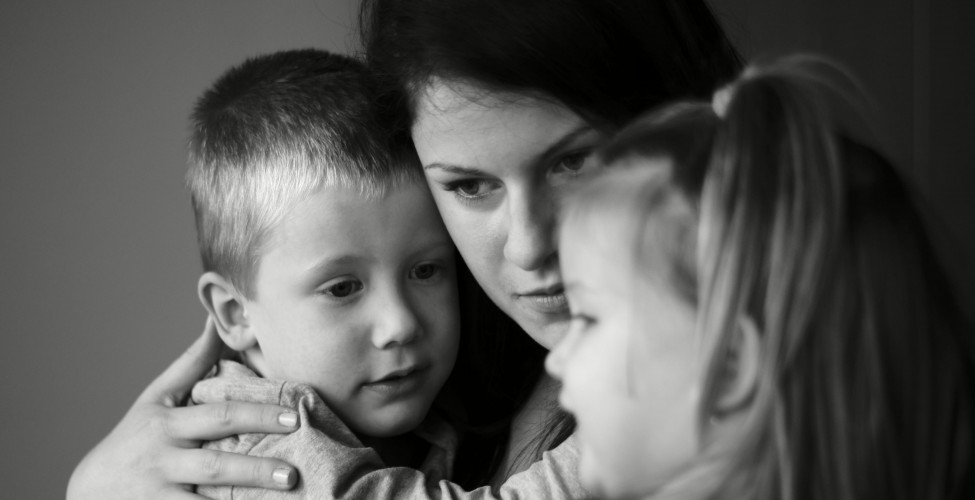 Lash and her brother were children witnessing abuse on their mother. In her story, Lash movingly describes her experience of children exposed to domestic violence and she is struggling to cope with the effects of witnessing the abuse. This is her story:

The violence towards my mother had started before I was even born, but I can only seem to remember from when I was 7 years old and onward. That's probably a good thing.

My father had been smoking weed as far back as high school, so every 'friend' he had was like him in many ways, understood why he did the things he did, even if they didn't do the same. My mother didn't have a job, he wouldn't let her, and he barely had a job himself, or at least a really bad one.

So we lived in my father's yard, in a trailer and a studio granny flat. My brother and I slept in the trailer, mum and dad slept in the granny flat together on a mattress.

My father was my hero when I was younger, I was his princess and he was my prince (in a family way). I was too young to even notice they would fight, or even know what fighting was, or even notice anything was going on at all, but I realized too late.

I was starting to hear/notice the screaming and smashing and banging that was happening, and I can remember my brother as we were lying awake trying to sleep screaming 'stop, stop, just stop!'. I never had the guts to say anything though, he was so much braver than me, so I just cried and blocked my ears. I remember laying awake one night hearing yelling and thumps, all of the sudden it all stopped, so I unplugged my ears and hoped it was over. Then my father started yelling 'do you want to go to the hospital or not, get in, get in!' and the car start to drive off.

I woke the next morning to walk into the granny flat and see a washcloth on the ground, and a red stain underneath, I then asked my father where my mum was, he just said she went to visit her family, so I left it at that.

Things were normal for a while, until he started taking things out on me. My brother was his favourite, so nothing ever happened to him. My father decided to take us for a walk one day and we ended up at the hospital, we were there to see my mother. We walked in and she had stitches all through her right arm. I asked her what she did but all I got was 'I made a silly mistake, it's ok now' I was too young to realize that she'd actually tried to take her own life, thanks to the abuse. She still has those scars, and all the other ones she got from the abuse.

The following years only got harder. I started noticing the bruises on her face, the tears she was shedding, etc. Because I was getting older, I seemed to be getting more involved, it wasn't shut doors when the violence was happening anymore, it would happen right in front of me. I saw my mother get pushed through windows, my mother was even tucking me in one night and my father came in with a butcher's knife threatening her, she had nothing but a needle on the ground, and she tried to defend herself with it, but that didn't work out very well obviously.

When I turned 12, we moved houses. I was making new friends, started ‘hanging out' down the street, just doing normal things. My best friend had asked to sleep over, I didn't know what to do, so I warned her about him, she didn't believe me though, so I agreed to let her stay – my father had done nothing in front of anybody who wasn't family anyway, so I figured it should be ok. I was older, so I started sticking up for myself a lot more, I got into an argument with him about my friend and me going to the park at 4 pm. I ran into my room just realizing that I had started an argument with him and sat on my bed with my friend and just as she asked me what happened we heard his footsteps coming down the hallway.

My friend started panicking and asking me what to do, I just told her to climb out of my window if he came in. Then she pointed to my door and said 'it's unlocked' so I jumped towards the door just in the nick of time to lock it. He then tried to break it down, luckily for me it was a pretty good lock, he gave up awhile after, my friend and I in tears. I started packing my things, when my father left to go to the pub I went out to mum and told her I was leaving, and said 'you may want to live like this but I don't!' and just like that, I up and left, and went to my friend's house with her.

My mother said my father tried everything to find out where I was. I was switching friends' houses each week, he was going to call the cops, call this, call that, but my mother managed to blackmail him into not doing it or she'd tell them what he'd been doing. That night she sat up and thought about what I said, and finally got the courage to tell him he needed to leave. He didn't expect mum to have the balls, so he did, he left.

The morning he left my mum was driving to work, and saw his car heading back to the house, she was so terrified that he was back to get revenge, kill her, stalk her, anything. She came back after work thinking he'd have parked his car around the corner or in a different street because she couldn't see it anywhere, and that he was waiting inside until she got home to kill her. She checked every inch of outside and looked in every window to try and see if he was in there, she couldn't so she got the balls to go into the house and check every inch of it, he wasn't there. Then she bolted up every window, and every door with wood, figuring if he tried to get in, she'd have enough time to escape. He never came though, so I came back home and we were finally a normal family, without a father.

I didn't speak to my dad for a while after that, but he still tried to contact me considering my brother was still keeping contact with him.

I needed to protect her, make sure she never went back to him.

But I just couldn't forgive him for what he'd done. Mum had told me she wasn't speaking to him either. I needed to protect her, make sure she never went back to him, so I went through her phone. Which was when I found a message from my dad saying 'you are a pathetic piece of shit'. So I grabbed my phone and sent him a huge, huge message back, calling him every name under the sun, told him if anyone was pathetic it was him, etc, he should have no contact with this family because he's not a part of it anymore as far as I was concerned.

A year later I called him, I wanted a family, I wanted to know he had changed. So I had a long talk to him, and all he kept telling me was that he never hit my mum, he never hit me etc. etc. So I hung up and realized he was just the same.

Another year later he got in contact with me, said he still wanted to be a part of my life. I agreed, saying we have a lot to sort out before anything becomes official or before I even see him though. He disagreed, but accepted it anyway. My father and I speak once every month now, I still haven't gone to see him, and I still don't plan to any time soon as I don't believe he can change. But I do need a father in my life.

I now suffer with depression, and anxiety. And recently suffered from bipolar. As well I'm a hypochondriac. I still cannot get over any of this, I'm still just as shook up, just as sad, just as anything. I'm still trying to get help but nothing seems to be working at the moment. But I shall keep trying, it is my mission to get over this, to be happy, and to live on my dreams and have a wealthy, happy life, with a lovely family of my own.

I'm only 15 now, but being through all this makes you realize so much before you really ever should. But, I'm ok. I'll get through this and I know it. My mother is doing fine too. We're living again, living normally. To anyone who has ever been through, or is going through domestic violence, you will survive, you can survive, so many people have and will. I wish my best to you.

Valentine Flowers - Say it With Flowers This Valentines Day