The Truth About the Pay Gap

For many of us, hearing statistics read on the news or shared online regarding gender inequality as shown in the pay gap can be, well, confusing. we think of standard salaries, and don’t ever hear about teachers making slightly less because they’re female, or two doctors doing the same exact position with different rates - in fact, we’re rarely given specific examples, which is why it can be so hard to understand. Yet at the same time, almost all of us, at least as women, know that feeling. We know what it’s like to be looked at differently when being considered for something. Not taken seriously. People not believing that you’re capable of doing something, and not being able to understand why. it’s the classic chick flick journalist scenario - the up-and-coming, hard-working Ivy League graduate protagonist who no one seems to respect, while we watch her annoyingly arrogant, sexist coworker get the promotion she’s been waiting for. that scenario works so well for those movies because we all resonate with it. They know their audience feels that on a deep level. The truth about the gender pay gap is that it’s rarely about two people in the same position receiving different salaries - it comes down to a history and culture in bedded in our minds. It’s an unconscious bias. The truth is, it has a lot more to do with who gets the great jobs in the first place. It’s been drilled into us that men are go-getters. That they are leaders, achievers, and will work hard and do whatever it takes. While we would never say it out loud, Women are far more often seen as less reliable, more soft-spoken, unwilling to say or do the hard things and call people out. They do what they’re told and don’t go above and beyond. The thing is too, that many of us can think of concrete examples to support these unconscious biases because instinctively we fill in those rules ourselves. As we grow up, and society tells us that this is who we are, we start to become just that. We start to believe that we don’t have the right to go get. That there’s no point in pushing and trying and going further because we just won’t get there. this is not the case with every woman, mini still push the boundaries, are driven, hard-working and will do whatever it takes to get to the top. It just means that it’s a lot harder for them to get there. It’s much harder to call out because it is an unconscious bias. Making a statement “men are ____” (trash, chauvinistic, etc.) does no one any good. because unwittingly, we are reinforcing the stereotype ourselves. We are all slaves to the culture. To the unconscious biases that we have. The pay gap doesn’t come down to a group of old white men sitting in a room saying that “women don’t deserve this!”. it’s been created by decades, centuries of an idea that we’ve all fallen prey to and on some level, are bought into. Instead of simply attacking and challenging the symptoms, we need to address the root problem. we need to prove the stereotypes wrong, and consciously work to go against our biases, both men and women.

The rate at which the pay gap is closing has slowed down immensely.

76% of people (men and women) think men are better suited to careers.

Studies have shown that when women are in higher roles, they often are better leaders and more successful, and many have admitted that this is in part due to the fact that they constantly feel the need to prove themselves because of their gender and are afraid to make mistakes.

Photo of the day - Pay Gap by Sector 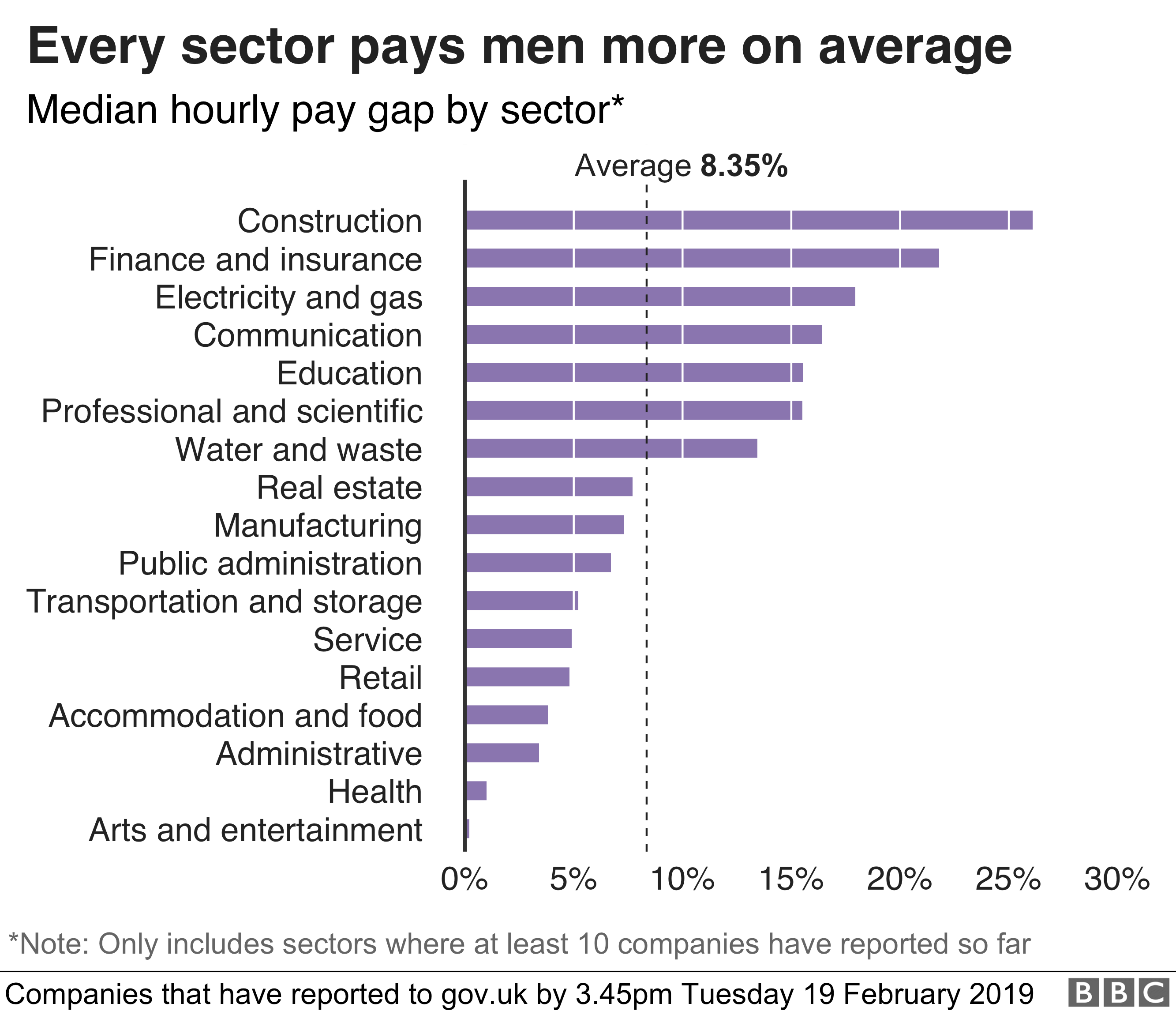 I’m not telling women to be like men. I’m telling us to evaluate what men and women do in the workforce and at home without the gender bias.

Article of the day - Unequal Pay, Unconscious Bias, And What To Do About It

Today is Equal Pay Day, the day we’re supposed to think about why women are still earning about 80 cents for every dollar earned by their male counterparts at work.  That’s part of the problem.  There’s been a lot of thinking, but not much action.  As a result, there hasn't been much progress in eliminating the pay gap over the last few decades.

One reason we may lack motivation to close the gap is confusion surrounding the roots of the problem.  Often people think that the pay gap can be entirely explained by women’s opting out of the workforce or choosing more flexible schedules to accommodate their families.  Others say the pay gap stems from men and women choosing different career paths, with men electing more lucrative professions.  While family obligations and career choice do account for some of the gender pay gap, they certainly don’t account for the whole 20 cents.  In order for women to achieve full parity with men at work, we must eliminate the unconscious bias that still plays a significant role in the gender differences in pay.

What Is Unconscious Bias?

Most people don’t head to work consciously thinking they want to promote men over women or that they want to pay men more than their female counterparts, yet unconsciously they still have a bias in favor of men.  This bias stems from gender stereotypes that we tend to hold about typical characteristics of men and women. In general, we think that men make better leaders and managers whereas women are more nurturing and make better caretakers. The activation of these stereotypes happens so quickly that we’re not typically aware of it - thus, the unconscious part.  We become aware of these stereotypes at a young age, and, as adults, both men and women are likely to apply them (you can determine your own tendency to unconsciously apply stereotypes on this Harvard University website).

How Does Unconscious Bias Impact The Gender Pay Gap?

Unconscious bias and stereotyping come into play at work when managers are determining which employees to hire and how employees should be compensated.  Everything else being equal between a male and female employee, unconscious bias often results in higher pay for the male employee.  In one often-repeated methodology for studying gender differences in pay, participants are given a resume to review.  Half of the participants have a resume with a woman’s name and half have one with a man’s name at the top.  Otherwise the resumes are identical.  Participants are then asked how much they believe the owner of the resume should be paid.  Even though the resumes are identical, participants consistently suggest higher salaries for the male candidate.

There are plenty of real-world examples of how this bias plays out.  For example, a study of over a million actual transactions on eBay revealed female sellers received about 20% less than male sellers who were selling the exact same brand new items.  In other words, people were willing to pay men more for the exact same items. The researchers controlled for everything that might impact the sales price (the reputation of the seller, the number and quality of photos, whether a reserve price had been set and the text describing the product), and the difference between the prices paid to male and female sellers of identical new products was still 19%.  Even for $100 gift cards, participants were willing to pay 6.9% more to male sellers than female sellers. The only explanation of why people would be willing to pay male sellers more for these products is unconscious bias.  It’s the same type of unconscious bias that creeps into determinations of salary and promotion in our workplaces.

The only way to completely eliminate unconscious bias is to be unaware of a person's gender. While this is difficult in most occupations, it worked fabulously for orchestra auditions.  When orchestra auditions became blind to gender (the auditioning musician played from behind a curtain, so as not to reveal his or her gender), a woman's chances of making through the final round of auditions increased by 33 percent.  Unfortunately, most organizations want to have the opportunity to chat with prospective candidates, and thus cannot be blind to gender.

Many organizations have adopted unconscious bias training programs in order to alleviate gender bias.  The idea is to teach their employees about how this bias seeps into their decision-making. While a noble goal, there are significant problems with this strategy.  First, unconscious behavior is incredibly hard to change, because it is, indeed, unconscious.  Second, there is evidence that raising awareness of the prevalence of stereotyping can actually increase the use of stereotypes.  In other words, the training could backfire and actually make things worse.  Fortunately, there are other ways to keep unconscious bias in check.

Because people don’t realize they have unconscious bias, outside systems of checks and balances must be in place to keep tabs on pay and promotion.  Iceland (ranked first in the world in gender equality) instituted a policy this January where organizations with more than 25 employees must ensure that men and women are being paid the same for the same jobs, and then they must report their findings to the government for certification.  If an organization is unconsciously providing more pay raises to men, it will show up on their report.  Unfortunately, the Trump administration halted an Obama-era rule that would have forced private employers in this country to reveal salary information to the EEOC.  These types of rules create accountability, and would have been a big step in identifying unconscious bias and reducing the gender pay gap.

Fortunately, organizations do not have to wait for government reform.  They can assess their own pay structures (although it’s best to have an outsider do it) to check for unconscious bias in their pay and promotion structures.  Only these checks and balances can eliminate the unconscious bias that keeps women from earning the same pay as their male counterparts.