Are Canadians Really That Polite?

While the list of Canadian stereotypes is shorter than that of many other countries, it's certainly true that Canadian politeness is well known and raved about across the world.

But are Canadians really that polite?

Canadian culture is notoriously evasive of conflict, which can lead to a false sense of niceness and politeness. Avoiding unnecessary arguments is a worthy cause, to be sure, but this can make it harder to be direct and lead to countless misunderstandings and other complications.

Canada is full of good manners - pleases and thank you's, common niceties, and friendly banter. While it's hard to prove with statistics, it certainly seems that Canadians are a polite people.

At the end of the day -- manners are important, but they're not everything. Politeness is a useful trait, but perhaps not at the cost of directness, honesty, and sometimes - the ability to confront others.

52% of Canadians think people are less polite than they were five years ago.

More than 84% of Canadians think that the decline in politeness has to do with parents failing to teach their children proper behaviour.

3 in 10 Canadians say they deal with someone rude on social media at least once a week.

Photo of the day - The Canadian Mob 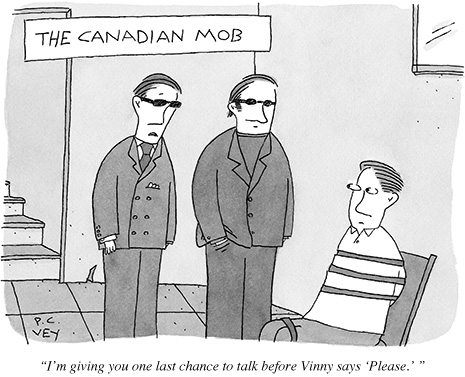 Video of the day - Can Canadians Talk Trash?

Article of the day - Are Canadians really that polite? We put the myth to the rush-hour test

Gusting wind whips garbage down the canyons of Toronto’s financial district. It’s the kind of blast that sends neckties flying into men’s faces, but here in Yusuf Farooqi’s cab, it feels refreshing in the steamy evening rush hour. Farooqi is driving his taxi with the window down, his brown eyes scanning for cyclists, fares, drivers and pedestrians.

The 38-year-old father of two is an owner-driver with Beck. He says 95 per cent of the riders are polite. That’s not always the case with other drivers. In more than a decade behind the wheel, he has seen his share of middle fingers, and had one angry cyclist spit on his windshield. He turned on the washer fluid and let it go.

“When it’s your business you’re not going to be stressed,” he says. “You won’t last.”

We are in the crucible of one of Canada’s most impolite situations to see if that old mythology holds up. Are Canadians the most polite people in the world?

I’m a bit of a cynic. Like most Canadians, I grew up close to the border, and more often than not, I found Michiganders were friendly, welcoming and polite. I didn’t completely understand why Canadians sewed small flags on backpacks and packed patriotic towels for all-inclusive vacations. The implicit message seemed passive aggressive, and maybe a little impolite. Love us world, but know we are different. We are not like them.

Politeness should not be confused with friendliness, although it often gets tangled up in it. Politeness is about making contact, acknowledging someone else’s presence and following implicit rules. “Politeness is a bit reserved, it brings with it a somewhat forbidding expectation that other people should be polite as well,” says Dylan Reid, author of Toronto Public Etiquette Guide.

“I think Americans value friendliness more than politeness, so they might get in your business a little more in a friendly way, in a way that Canadians might find intrusive,” Reid says. Politeness varies regionally. People may be more easygoing in other parts of the country, but in Toronto, efficiency is at the core of politeness.

Like right now. Farooqi sees a woman standing on King St., scanning the traffic. He waves, she nods, he waits, and then pulls a U-turn. They exchange hellos. Shelley Edwards raises her eyebrows because I am already in the cab, but within seconds, she is on board with our weird situation, and engrossed in the discussion. Edwards moved to Toronto 30 years ago from Winnipeg, and she’s never been at a loss looking for help.

"I’ve always believed it was a Canadian thing,” she says of politeness.

At Bay and King, a rush-hour dreamer drives into the intersection on the dying embers of a flashing hand. Yellow changes to red, as it always does, and he blocks eastbound King drivers for most of the light cycle. Farooqi hates this move (“That should be ticketed”) but he’s not going to honk.

“That makes you a polite driver,” Edwards laughs from the back seat. “I would have been on the horn by now.”

“Bonjour is the common salutation, and wherever two meet, whether acquaintances or strangers, their hands are respectfully applied to their hats or caps, and the friendly bon jour. pleasingly uttered as they pass,” he wrote in A Pedestrian Tour of Two Thousand Three Hundred Miles in North America.

When Stansbury returned home, he felt a relief to be rid of such polite and mundane people.

“There is something, notwithstanding all their complacency, that makes many an American glad to escape out of their province … The contrast is plain. There we have reserved, austere, unambitious peasants: here, plain, open-hearted, merrymaking farmers.”

Stansbury even went to a Vermont hilltop to look back at us with moderate scorn: “It seemed as if clouds, cold and storms, had been left with Canada, whose horrible hemlock swamps spread in wide prospect to the north.”

The Americans had a storm of their own, and the long simmering issue of slavery in a land of liberty erupted in the Civil War in 1861. When it ended in 1865, the disparate groups living in what would become Canada began to warily watch their militarized neighbour.

“The story theoretically starts out as mutual accommodation” between the French and English, says Michael Adams, president of Environics research, and author of Fire and Ice: the United States Canada and the Myth of Converging Values. “From the perspective of Aboriginal people actually it was colonialism.

“It isn’t that we understood or even liked each other very much,” he says, “But we were more afraid of the Americans, so we created a country.”

As a marketing ploy, being polite was an early hit. In 1897, the Queen’s Hotel in Montreal was trying to make a name for itself as the “Polite Hotel of Canada.”

“From the proprietor to the bell boys, all exhibit to the guests that true politeness which grudges no pains to ensure the comfort of its object,” an advertisement noted in the local press.

This year, Roots has a button to celebrate 150 years of Confederation. It says “nice.”

“We’re polite, friendly people that say sorry when you bump into us,” an accompanying explanation states. “During the past 150 years, we’ve shown the world what it means to be nice though our bravery, strength, pride and confidence.”

In an age of truth and reconciliation and Black Lives Matter, that seems a little too easy. Canada’s history, with residential schools, discriminatory laws and internment camps, is messy. The Canadian experience, through the lens of politeness, doesn’t exactly fit on a button.

Adams believes that modern Canadian politeness stems from Charter values of equality and multiculturalism, and a rejection of hierarchical culture.

“We kind of pride ourselves on being a country that can bring people from all over the world and we more or less get along,” he says.

Inherent in Canadian politeness is a rebuffing of other countries where you see the rise of xenophobic nationalism and divisive politics.

He calls the U.S. a “50-50” nation, with shrinking common ground between the two camps. “That’s a nation that is quite stressed and on edge,” he says. Canada is a “two-to-one” nation, with about two out of three people being “more or less progressive,” and the remaining people not open to diversity or social change.

To be polite in Canada is to hold open a door, perhaps make some small talk, and maybe establish a common humanity.

“It’s an ideology that becomes self-fulfilling if you have the institutions to support it,” he says.

Back in the cab, the sidewalks thin out at 6 p.m. We have picked up three fares: Edwards, a couple with groceries, and an architect. Everyone was nice.

Farooqi drops me off and waves goodbye. I don’t know if Canadians are more intrinsically polite than any other culture, but when we’re not using the idea as a crutch to avoid critically examining our history and ourselves, it is a nice idea to aspire to. I keep thinking of what an architect said as we drove down Bay St.: “It doesn’t hurt to be polite,” he said. “It changes everything.”

Question of the day - How important do you think politeness is?

How important do you think politeness is?

CAT: The Legacy We Leave

August 7th 2020 - Why Buying a House is a Terrible Investment