It’s no secret that we are hardwired for relationships. Regardless of introvert/extrovert tendencies, all of us need other people. We simply can’t survive on our own.

I don’t know a single person who doesn’t desire community. I’m half convinced that the reason shows like “Friends” or “How I Met Your Mother” have been so successful is because for the 22 minutes that they play on the screen, viewers feel like they have it. That ride-or-die, I’ll be there for you kinda thing.

So how do you get it?

Cultivating community requires you to step out of your comfort zone - to be bold and introduce yourself to new people and experiences. It’s a journey that requires vulnerability and openness. But community and doing life alongside other people is part of the human experience. It’s something we were built to crave and to live out. Community is foundational to who we are and while it can take time to find, it is absolutely worth the effort.

A study last year revealed that 50% of people in the US feel lonely or isolated.

Loneliness increases risk of dementia - so having friends literally helps you keep your mind sharp.

Photo of the day - Pizza Friends 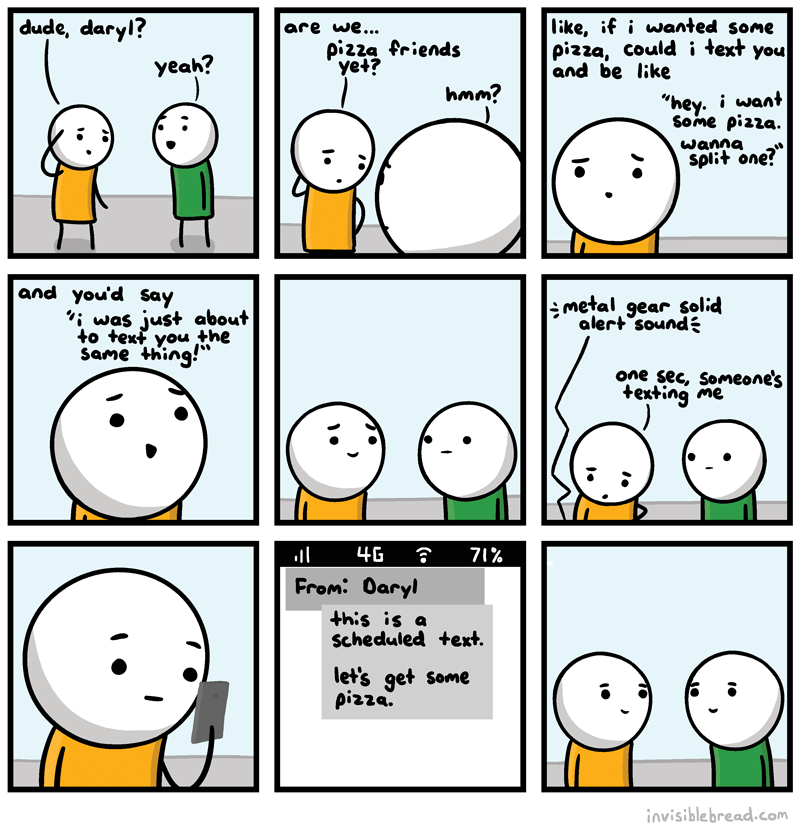 Video of the day - TALK: Why we need community more than ever before

The only way to have a friend is to be one.

Article of the day - Community.

I moved out at 17. Packed up everything I owned (more or less) and started over, nine hours away from all of my friends and family. It was the hardest year of my life. I went in knowing it would be hard, but somehow unconsciously expectant that I would suddenly find myself surrounded by community and support. Instead, I became completely isolated.

I was around people - I didn't live alone, and I spent most of my time in very close quarters with the 15 other people in my program. But for some reason, we didn't hit it off. I was angry. I didn't understand why this program, which I felt so strongly called to, was full of a group of people that were so different from me. I had this idea of walking in and all of the loneliness and displacement that I'd felt in high school would melt away. It was supposed to be natural, but it wasn't. and those feelings didn't go away - they came back, stronger.

I have learned that community is just as much about what you make of it (if not more) than it is about the people around you. You must be the kind of friend you wish to have before you will receive the same kind of friendship in return. Simply put, be the kind of person you want to be around. It took me 10 months of asking strangers to go for coffee, sitting alone at church every week, joining bible studies where I knew no one, and taking any and every opportunity for connection to finally understand what it looks like to build community.

I was prepared to welcome new relationships, but I had zero expectation of initiating them. It's strange to talk about now with the people that have become my best friends, because telling them how shy and withdrawn I used to be seems like a lifetime ago. And it's hard to believe how much time I spent waiting around for someone to walk out of nowhere and invite me in.

I met some really lovely people during that time who were genuinely trying to connect with me, but even then I was unable to be real and vulnerable, because my self-enforced stakes were too high. I was so desperate for any sense of community that I didn't allow myself to do anything that I thought could jeopardize an opportunity for it.

As soon as I gave up on trying to be who I thought I was supposed to be, and was just real, I started creating real, valuable friendships, to a level of depth in relationship I'd never reached with friends before. I had nothing to lose, and that freed me up to let go of the inhibitions that were preventing me from being comfortable in my own skin.

Even then, once it finally clicked in my brain, it wasn't instant family. Finding and learning to be part of community is a process, one I'm still working on. I have met the most incredible friends, who support and love me so well and so much. Being in community means living and doing life together, and that's not always easy. But it's so worth it.

So, don't waste your own time. Rarely does community seek you out. Take a risk and be bold. Let go of the expectation for how things "should" be, and open yourself up to real, meaningful, life changing community.

Question of the day - What’s most important to you in friendships - common interests, loyalty, sense of humour, etc.?

What’s most important to you in friendships - common interests, loyalty, sense of humour, etc.?