Why Facing Your Fear is Better Than Living With Regret

You know that feeling -- the shaky hands, sweaty palms, wishing you could be anywhere else -- when you know what to do and it still scares the living daylights out of you?

Fear is a powerful thing. It holds you back, pins you down, and tells you to run. Facing your fears head on is terrifying. But it's much less terrifying than the prospect of living with regret forever.

Fear is a temporary adrenaline rush. It can be traumatic, to be sure, but it is a temporary kind of pain. Regret is permanent. It gnaws away at your soul, year after year, making you wish there was something, anything you could give to go back and do it over again.

It's true -- facing your fears doesn't guarantee success. But it does bring you much close to peace, contentment -- knowing that you really did all that you could. One could argue that is a much greater success than any kind of money, fame, or alike.

Whatever you're afraid of, go for it. Give it all you've got. Watch it come to be, or walk away knowing that there is truly something different in store for you.

Regret isn't a bad thing--it's a key feeling that allows us to learn. 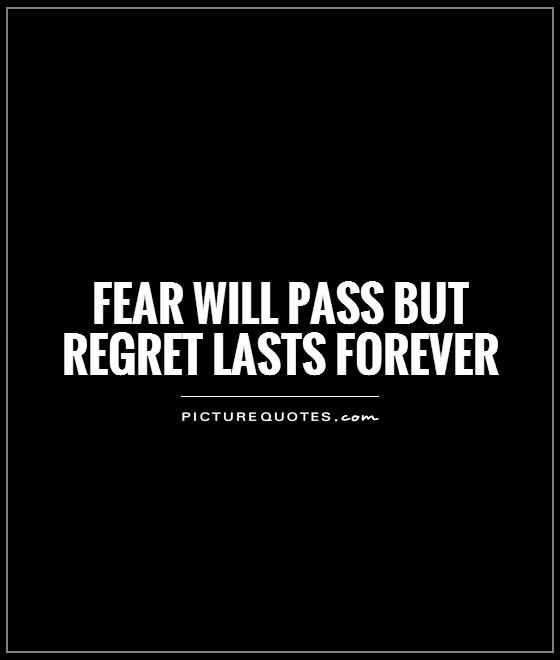 We crucify ourselves between two thieves: regret for yesterday and fear of tomorrow.

The fear of missing out is one of the deadliest lies we listen to.

It usually goes something like this in my head:

“I better say yes to this random opportunity. What if this is the single, most important opportunity I’ll ever get? Is this the one that will break my entire career wide open? If I pass up this opportunity, some doppelgänger of mine, with less gray hair and better teeth, will say yes to it. He’ll go on to fame, piles of cash and more success than the world has ever known. Friends will say, ‘Why were you so dumb? Why did you say no to that? It’s so obvious.’ I’ll hang my head low and sit in a dark, moldy room forever muttering about what could have been while I grow one of those awkward neck beards.”

When that fear comes up, I either hide from all opportunities, paralyzed that I’m going to say or do the wrong thing. Or I say yes to any opportunity that crosses my field of vision. You’ve got a podcast that records at midnight, an audience of mostly relatives, and you want me to record it during my family vacation? Done!

I think this stems from the fact that we like to believe in the concept of “once in a lifetime opportunities.” If we were honest, we’d call these what we really hope they are, “Win the lottery moments.” We believe in these types of opportunities often out of laziness. The picture of having your entire life changed in the course of one unexpected, outrageous experience sure beats actually working hard. Hard work isn’t fun to talk about; it’s far better to have Richard Branson run into you at a Whole Foods and give you a billion dollars of startup for your business while you shop for complicated olive oils. That’s a better story, but once-in-a-lifetime opportunities happen a lot less than we think.

The picture of having your entire life changed in the course of one unexpected, outrageous experience sure beats actually working hard.

Missing the right opportunity is half the fear we’ll experience and the other is picking the wrong opportunity. For me, the question I hear when I’m afraid of hustling on the wrong thing is:

“What if the career I’ve chosen is just a fad, like swing dancing?”

Fear uses that particular activity against me because of a girl I once knew. I met her during my last year of college before I dated my wife Jenny. At the time, swing dancing was all the rage. I think the movie Swingers was out at the time and the “Big Bad Voodoo Daddies” were gigantic. You are not going to believe the second half of this sentence, but it felt like everybody was into swing dancing.

Every Wednesday night I went to a place called Five Points with my friends for Swing Dance night. After a few weeks, there was a girl there who I always danced with. We never dated–dance was about the only thing we had in common–but for a few months we were consistent partners. This is starting to sound like the plot of a movie, a preppy girl meets a boy from the wrong side of the streets and swing dancing teaches them they are not that different after all.

One night, as we swung or did whatever is the past tense of the verb to swing dance, she told me she had quit her job. Her parents were against the decision but she was going full time into swing dancing. I smiled and nodded, while trying to flip her over my head, but inside I was thinking, “Does she not know this is a trend? This nightclub is already a little emptier than it was two months ago. We’re on the tail end of this adventure. Swing dancing won’t last forever.”

In her passion to launch a do over, she missed the very obvious signs that swing dancing wasn’t a great foundation to build her life on. Why didn’t she work on a small skill, like learning how to be an instructor at night while she still worked her day job? Why did she gamble everything? I never asked her and we lost contact, but 15 years later, I still think about that conversation, especially when I’m afraid.

A little more than 18 months ago I left my dream job to become an entrepreneur. What if I’ve just chased the equivalent of swing dancing with my life? What if public speaking, social media, and being an author are all the rage right now but will eventually cool off? What if you can’t be a full time author any more than you can be a full time swing dance instructor?

If fear is a tidal wave, large and loud and temporarily very powerful, regret is a small stream that cuts a canyon into your heart slowly over time.

I was a professional writer for 15 years before I tried my latest career jump. This was no impulsive leap upon hearing the first siren call of the writer’s life. But fear is still loud. Eventually though I learned a simple lesson for when it shows up.

Fear is not the same thing as regret.

Sometimes we confuse the two as if they are the same, but they are not. They are very different.

Regret has a much longer shelf life than fear. Fear is a moment, a beast of a decision you’re afraid to make, a demon of a day you’re afraid to face. Regret is much more of a slow burn. If fear is a tidal wave, large and loud and temporarily very powerful, regret is a small stream that cuts a canyon into your heart slowly over time.

Change isn’t easy. Do over moments are not always simple. I know that. I hate them sometimes in my own life. I get afraid but I have to choose something and so do you.

Will you face the fear of today or the regret of forever?

We get to choose that.

Will you attack your fear of failure, maybe even fail and try again? Cleaning the beach of your life after a wave that crushed you but left lesson upon lesson in its wake?

Or will you give up on your do over? Believing that kids can dream but adults must settle? Allowing that thin line of regret to trickle over time until it splits your life in half?

I choose fear. I choose grit.

Question of the day - If you could change one thing you've done, what would it be?

If you could change one thing you've done, what would it be?