Last week was Remembrance Day in Canada and Veterans Day in the U.S. This day is a chance to honor, remember, and be grateful for those who sacrificed so much so that we might be free. In light of the current culture that seems built on the social justice movement, it calls into question the ethics of North America's self-centredness.

To preface -- there can be no question over whether or not we as a society have a long ways to go. We do. There is deep mistrust, division, malice, and corruption among our leaders, citizens, and those in positions of power. That said, as we address these issues, calling each other to be better, do more, we cannot buy into the idea that this is the worst thing have ever been.

Those word may not have been spoken, but all too easily believed, we assume that this level of brokenness SURELY could not have existed before. How could we have let things get this bad, we ask, when we forget how bad they have already been? How bad they still are for so much of the world?

Attempted genocides were not abandoned in the 20th century. War was not left behind. Equality is yet to be achieved in the western world, yes, but SO much of the world is drastically further from it than we are.

Fight for justice? Yes. Hold your leaders accountable? Absolutely. Demand a better life for those you care about? 100%.

But don't forget what we are coming from. Don't lose sight of how lucky we are relative to other nations at this very moment. We have to stop living in ignorance, to look outside of ourselves and fight for justice for those we don't know. Hold leaders accountable who are not our own. Demand basic rights for everyone in the world, not just extra freedoms for ourselves.

Keep the fight, the passion, but widen the vision. Remember the goal.

As of three years ago, at least 40 million people around the world were enslaved.

Almost half a million children die every single year from lack of food, shelter, or clean water.

Nearly half of the entire world lacks the most basic healthcare services.

Photo of the day - Discrimination Around the World 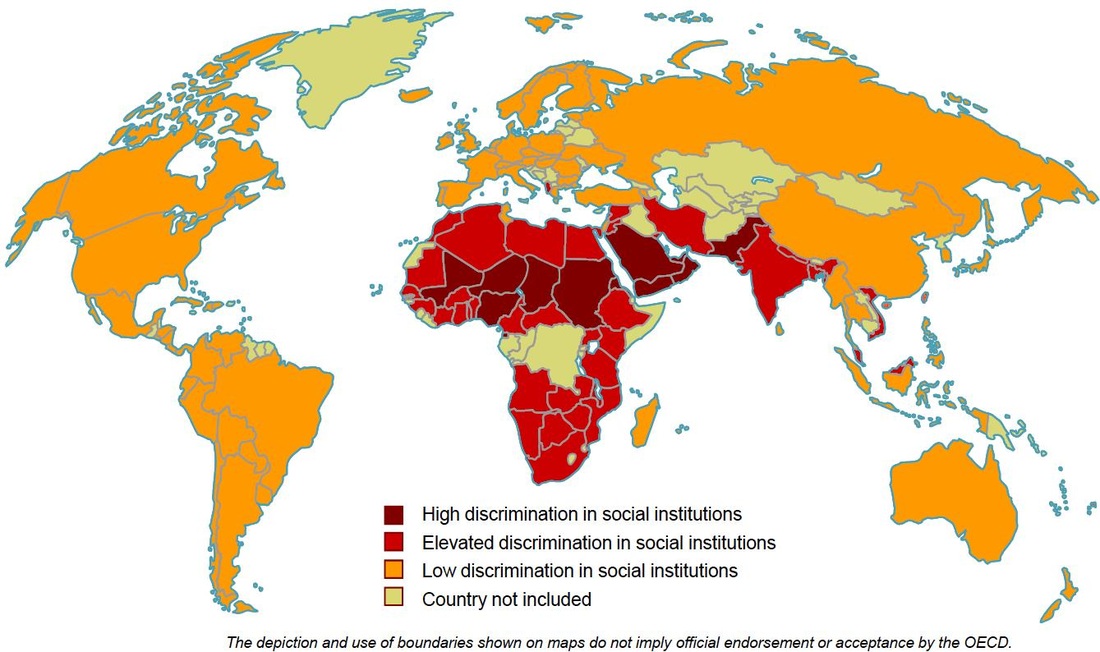 Video of the day - What Are The World's Biggest Problems?

The number of people forced to flee their homes across the world has exceeded 70 million for the first time since records began, the UN’s refugee agency has warned.

About 70.8 million – one in every 108 people worldwide – were displaced in 2018. This includes people who were forced to flee their homes last year, as well as people who have been unable to return home for years.

The figure is a conservative estimate, according to the study’s authors, because the impact of the crisis in Venezuela is still not known.

Launching the report, the UN high commissioner for refugees, Filippo Grandi, criticised Donald Trump and other world leaders who portray migrants and refugees as a threat to society.

“In America, just like in Europe and in other parts of the world, what we are witnessing is an identification of refugees – but not just refugees, migrants as well – with people that take away jobs, that threaten our security, our values,” Grandi said. “And I want to say to the US administration to the president, but also to leaders around the world: this is damaging.”

The figure of 70.8 million displaced people includes 25.9 million refugees, 41.3 million people displaced within their own borders and 3.5 million asylum seekers.

Globally, children make up about half of the refugee population.

“Year on year the international community is proving unable to make peace. You’ve got a number of regional conflicts, some of which have drawn in international actors. If you look around the world it’s very hard to see resolution to conflicts,” said Matthew Saltmarsh, of the UN refugee agency, UNHCR.

An estimated 13.6 million people were newly displaced in 2018, according to the report. Last year was marked by sharp increases in people fleeing the economic and humanitarian crisis in Venezuela.

More than 4 million Venezuelans have now fled their country, according to the UN, with many travelling towards Latin America and the Caribbean. This marks a huge rise on 2015, when the number stood at about 695,000. It is the biggest exodus in the region’s recent history, and has left asylum procedures completely overwhelmed.

Last year also saw increases in the number of people displaced in Ethiopia, where inter-communal violence in the south and west forced up to a million people to flee their homes.

The new figures follow a decade in which the number of people forcibly displaced has soared rapidly, from 43.3 million in 2009. According to the report, five countries account for more than two-thirds of all refugees (excluding those defined as long-term Palestinian refugees): Syria (6.7 million), Afghanistan (2.7 million), South Sudan (2.3 million), Myanmar (1.1 million) and Somalia (0.9 million).

On Tuesday, the International Rescue Committee warned that despite the record numbers of displaced people, the number of resettlement slots offered worldwide halved between 2016 and 2017.

“There are very few countries that have increased the number of resettlement slots,” said Nazanin Ash, vice president of global policy and advocacy for IRC. “Most countries have decreased or at least not met their [targets]. It’s having a devastating impact. Nothing has changed about these [displaced] populations – their need for safety has only grown, their vulnerability has only grown.”

The US remains the “largest supporter of refugees” in the world, according to Grandi. The country is the biggest single donor to the UNHCR, but he added that it also has the world’s biggest backlog of asylum claims, at nearly 719,000. More than a quarter of a million claims were added last year.

This week, the UK announced it would welcome up to 6,000 refugees in 2020 and 2021. “You could argue that the number could be higher,” said Saltmarsh, but he added that the UK’s resettlement programme was well run.

For the fourth consecutive year, Turkey hosted the largest number of refugees worldwide, with 3.7 million people. The main countries of asylum for refugees were Pakistan (1.4 million), Uganda (1.2 million), Sudan (1.1 million) and Germany (1.1 million).

Lebanon continued to host the largest number of refugees relative to its national population: one in six people in the country is a refugee.

Question of the day - Do you stay informed on what's going on in most other countries?

Do you stay informed on what's going on in most other countries?