When to Push Yourself

I'm a big advocate for balance in life. Taking care of yourself, listening to your mind and body, and paying attention to what it needs and can handle. But any balanced life needs a bit of a push now and then, a nudge towards something that's uncomfortable, risky, or unknown.

So when do you do it? When do you push your limits, test yourself, and find out what you’re really made of?

First, push yourself anytime you get too comfortable. Complacency is not your friend, and growing means stepping outside of your comfort zone. If you’re not learning, you’re dying, so don’t hesitate to get out of your comfort zone and relax a little.

Next, push yourself anytime you’re too scared to move. Fear is a tricky thing — it’s our body’s defence mechanism, and can be incredibly helpful, but it can also be paralyzing. The best way to get out of a slump is to shake things up entirely.

Finally, push yourself anytime you set a goal. Hitting big targets is only accomplished by putting in big effort, and to get anywhere, you’ll need to do just that.

Don’t push yourself to the point of snapping, but make sure you never stop growing, learning, and becoming more than you’ve been. Your future is as big, wide, and promising as you make it.

Pushing yourself too hard can actually be bad for you.

Most boundaries or limitations you have are all mental.

Science has shown that you literally cannot grow as a person when you are comfortable.

Photo of the day - Can You Push Yourself? 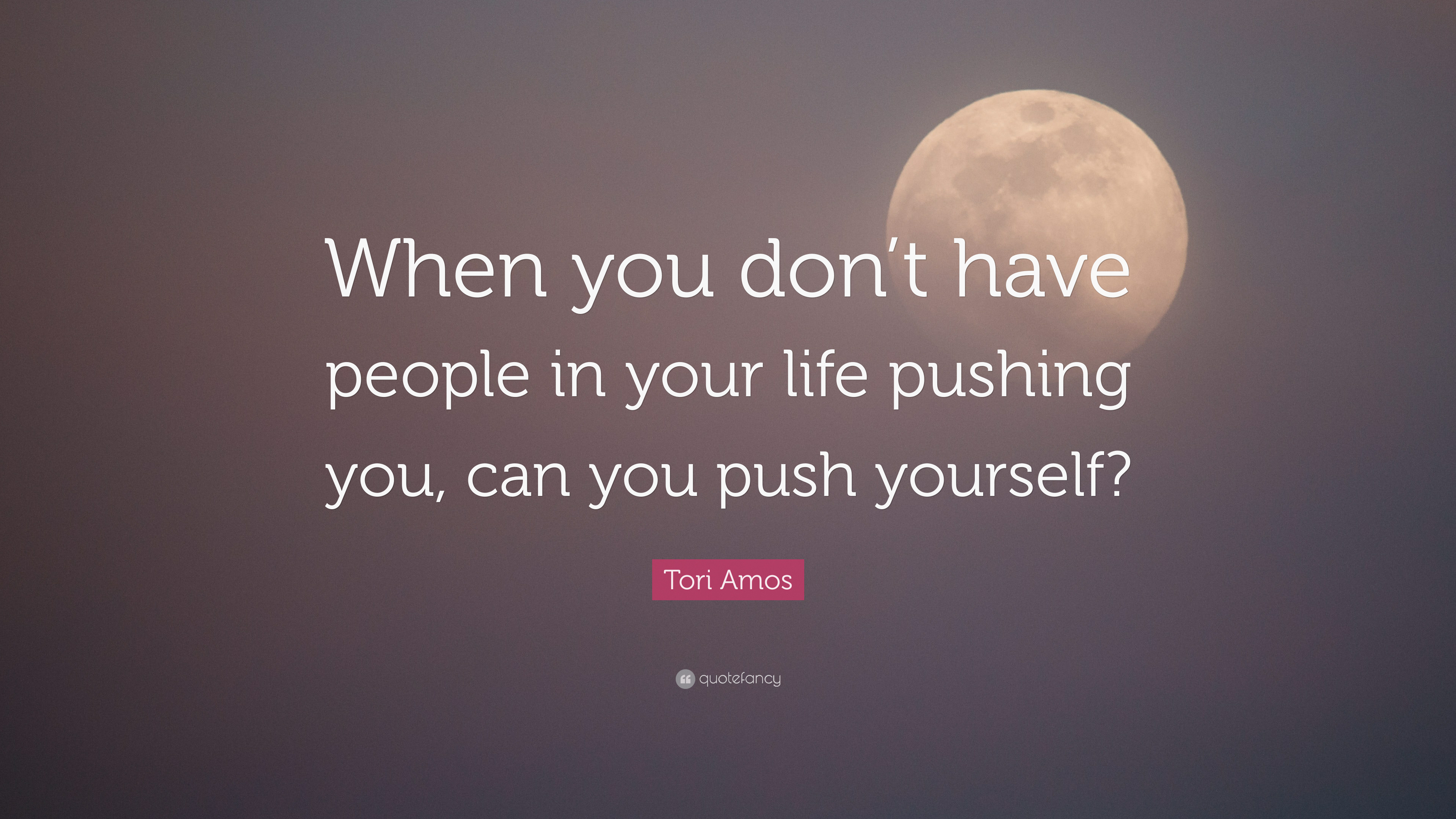 Video of the day - The hidden Value in Pushing your Body to its Limits. | Damian Browne | TEDxHSG

How will I know who I can become if I don't give myself the chance to try new things, to push myself beyond my normal boundaries? Who might I be if I am away from the things that I currently use to define myself?

Many people I talk to are concerned that they’re not pushing themselves hard enough. They either feel like they’re not trying hard enough to make their current job work, or they worry they aren’t doing enough to transition into a new one.

There’s certainly a lot of traditional wisdom out there about the benefits of pushing yourself hard:

“There are no gains, without pains.” – Benjamin Franklin

“In case of doubt, push on just a little further and then keep on pushing.” – General George S Patton, Jr.

“If you are going through hell, keep going.” – Winston Churchill

My own personality is wired this way. My default, if I’m worried or stressed about anything at all, is to double down on my efforts and push myself harder towards what I want. Left to my own devices, I begin to obsessively go over my To Do list, ignore all my wants and needs, and proceed to power through.

The problem with this No Pain No Gain attitude is that it has a downside—namely the pain. In my case, in addition to the normal discomfort of exertion, it inevitably leads to exhaustion, grumpiness, fruitless labors, and—sooner or later—depression, anxiety, and insomnia.

On the other hand, I’ve found over the years that when I allow myself to stop trying so hard, when I rest and relax and take it easy, I often get more done than when charging in an all-out, take-no-prisoners assault on my To Do list. I certainly enjoy my life more when I find ways to work with ease.

So the question is—my question is—when the going gets tough, how do you know whether to push harder or let yourself off the hook?

A Better Way to Frame the Question

Actually, I’m being a bit disingenuous with that exact question, because my answer to it would be “neither.” Or maybe “both.”

For reasons I’ll explain below, I don’t ever recommend pushing yourself (unless that’s what you call getting over the initial hump of inertia and resistance in order to work on something important to you). And if letting yourself off the hook means not eviscerating yourself physically, mentally, or emotionally, I’m all for it. But if it means giving up on your dreams and intentions, then please don’t ever do it.

The question about how hard to push is actually a question of how best to marshal the power we need to turn an idea or intention into reality.

You don’t get strong just by lifting weights; resting is an important part of the process. Easing up doesn’t necessarily mean we’re giving up on our intentions or even slowing down the process. It can actually be the most efficient and effective way to get to where we’re trying to go.

The trick is knowing what’s called for when. Not taking action can be productive rest or paralyzed procrastination. Nose-to-the-grindstone work can be incredibly powerful or wasted effort. How can we tell the difference?

I can’t claim to have the final answer, as I’m still working on that myself. But I have found 3 questions through trial and lots of error that can help you determine when to increase your intensity and when to ease up off the gas:

When I find that a particular task feels like pushing a heavy boulder up a steep hill, I’m usually headed in the wrong direction. Redoubling my efforts will probably only make things feel harder and yield fewer results.

That’s because when I’m pushing, I’m relying on willpower alone (which studies suggest is at least in some ways a limited resource ). I’m focused on what I think I should be doing and ignoring what I want, how I feel, and what my inner wisdom is telling me. Often I’m doing something not out of love or intrinsic motivation, but because I’m trying to avoid feeling shame, guilt, or fear.

Realizing that our current direction isn’t aligned with our values, desires, or intentions opens the door so compassion can enter. It’s not that we’re lazy; it’s that we’re going the wrong way—of course part of us is going to resist. If it feels this way to you, there’s no shame in easing off so that you can create some space to reevaluate your direction, reconnect with your inner wisdom, and find something that feels more like a pull than a push. You’ll be much more powerful if you can move towards something wholeheartedly.

If, on the other hand, what you’re working on does feel aligned to you, you can move on to the next question.

As I’ve explained in a previous post, most of us tend to have one of two habitual responses to anxiety: either we move towards it by taking (usually frantic) action or we withdraw away from it through distraction and procrastination.

When things get tough, when faced with uncertainty, when things don’t go as planned—what do you do? Do you tend to push harder, effort more, and try to force things to go your way through sheer force of will? Or do you freeze, shut down, look for other things to get busy with, and fall prey to procrastination? (This last is often the case, by the way, for the people I mentioned earlier who know they want to make a career change but aren’t doing anything about it.)

Regardless of your answer, the best thing you can do in many cases is the opposite of your habitual response. If you tend to push, try slowing down or doing less. If you usually freeze, try taking any action that allows you to engage with what you’re avoiding (and keep in mind that the smaller it is, the better; you don’t want it to feel overwhelming).

The key is to do whatever feels a bit scary and like letting go of control. This will, of course, bring up anxiety because it takes us out of our comfort zone. The key is to develop our ability to stay with this anxiety long enough to be able to experience the benefits of a different type of response.

When I’ve done this, even though part of me screamed the entire way that we were surely headed towards certain death, I ended up feeling stronger and more powerful. I also found that not only did the world not end when I did things differently, but things actually often turned out better than usual.

Ah, timing. The bane of my existence.

Unfortunately, the world usually has different ideas. And despite my best efforts to resist, I’ve found over and over again that in a fight between me and How Things Are, How Things Are always wins.

There are so many reasons that this might not be the right time for something I want to do:

I realize that this can be a slippery slope. For many years I never let myself put things off in the future because I figured that I was just procrastinating and making myself feel better about it by saying now wasn’t the right time. I feared that if I didn’t do this difficult thing now, I never would.

In evaluating whether this is the right time for something, it can help to look at everything you’re currently committed to and be very honest with yourself about your actual capacity for taking action without losing your sanity. If you’ve taken on more than you’re able to manage, sense what feels most important to do now, and give yourself permission to focus on that and let go of everything else. You can always set up reminders to come back to these other things later. I also find it very helpful to check in with my emotional and somatic intelligence and see what they can tell me about what actually needs to be done now and what might be better tackled later.

When I do this—when I’m willing to listen to what wants to happen and yield to How Things Are—things don’t always happen on my timeline. But the important things do happen, if slowly, with plenty of power and ease, and that’s what matters most.

Bonus Question: Is It Kind?

Go slowly. Take lots of breaks. Let yourself take the smallest baby step imaginable. Don’t take on more than you can while still taking really good care of yourself.

Question of the day - What's been a challenge that you've learned from?

What's been a challenge that you've learned from?