The Problem With Toxic Masculinity (It's Not What You Think)

Over the course of the last several years, many important conversations have been had around the idea of gender equality. Out of those, people have begun to call out what they see as "toxic masculinity" in the world today. This idea of hyper-extreme aggression, violence, and even protective tendencies that has simply gone too far. It seems to be supported by plenty of statistics, and at first glance, most can agree that it's not a healthy mindset.

With that said, by simply acknowledging the problem and leaving it, we seem to have made it worse.

Let me explain -- toxic masculinity is indeed unhealthy and unhelpful, and it has the potential to be quite dangerous. That said, all we've done is point out ways that men are "bad". There's been no alternative provided, no room for those who don't fit into that category, and no grace to grow or process for healing.

The term "not all men" has been widely criticized, and somewhat fairly, at least when used in response to a violent crime against a woman. But those men, feeling alienated, alone, and unsure of how or who they can be, are real people. We need an alternative masculinity, and we need it now.

Toxic masculinity is exactly what it sounds like. But it's not synonymous with being a man. Not everyone fits in that category, and as we champion womens' rights, equality, and freedom, we need to also champion the quality men around us. The ones who are fighting for us and with us, who stand up for what they believe in. As we remove the bad from the world, we need to make space for the good to grow. The future is bigger than our past, and we must allow it to flourish.

The mortality rate of young men is approximately 4-7 times higher than that of young women.

7 men are killed for every one woman.

30% of murdered women are killed by a spouse.

Photo of the day - To Be a Man 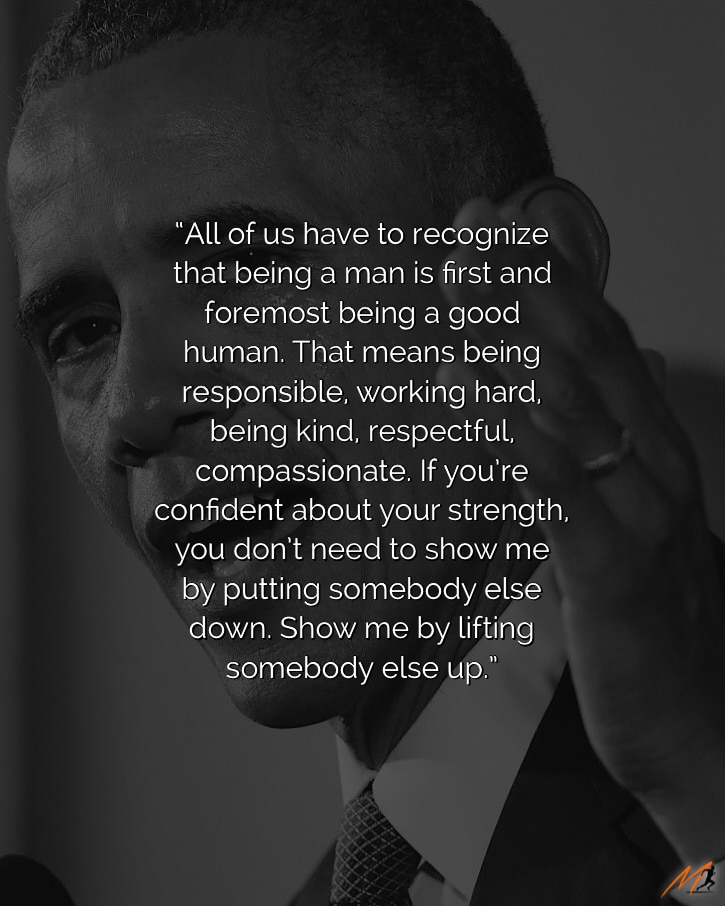 Men in trouble are often in trouble precisely because they are trying to Get a Grip and Act Like a Man. We are at risk of suicide because the alternative is to ask for help, something we have been repeatedly told is unmanly. We are in prison because the traditional breadwinning expectation of manhood can’t be met, or the pressure to conform is too great, or the option of violence has been frowned upon but implicitly sanctioned since we were children.

Over the past several years, toxic masculinity has become a catchall explanation for male violence and sexism. The appeal of the term, which distinguishes “toxic” traits such as aggression and self-entitlement from “healthy” masculinity, has grown to the point where Gillette invoked it last month in a viral advertisement against bullying and sexual harassment. Around the same time, the American Psychological Association introduced new guidelines for therapists working with boys and men, warning that extreme forms of certain “traditional” masculine traits are linked to aggression, misogyny, and negative health outcomes.

A predictable conflict has accompanied the term’s rise. Many conservatives allege that charges of toxic masculinity are an attack on manhood itself, at a time when men already face challenges such as higher rates of drug overdose and suicide. Many progressives, meanwhile, contend that the detoxification of masculinity is an essential pathway to gender equality. Amid this heated discourse, newspaper and magazine articles have blamed toxic masculinity for rape, murder, mass shootings, gang violence, online trolling, climate change, Brexit, and the election of Donald Trump.

Masculinity can indeed be destructive. But both conservative and liberal stances on this issue commonly misunderstand how the term toxic masculinity functions. When people use it, they tend to diagnose the problem of masculine aggression and entitlement as a cultural or spiritual illness—something that has infected today’s men and leads them to reproachable acts. But toxic masculinity itself is not a cause. Over the past 30 years, as the concept has morphed and changed, it has served more as a barometer for the gender politics of its day—and as an arrow toward the subtler, shifting causes of violence and sexism.

Despite the term’s recent popularity among feminists, toxic masculinity did not originate with the women’s movement. It was coined in the mythopoetic men’s movement of the 1980s and ’90s, motivated in part as a reaction to second-wave feminism. Through male-only workshops, wilderness retreats, and drumming circles, this movement promoted a masculine spirituality to rescue what it referred to as the “deep masculine”— a protective, “warrior” masculinity—from toxic masculinity. Men’s aggression and frustration was, according to the movement, the result of a society that feminized boys by denying them the necessary rites and rituals to realize their true selves as men.

This claim of a singular, real masculinity has been roundly rejected since the late 1980s by a new sociology of masculinity. Led by the sociologist Raewyn Connell, this school of thought presents gender as the product of relations and behaviors, rather than as a fixed set of identities and attributes. Connell’s work describes multiple masculinities shaped by class, race, culture, sexuality, and other factors, often in competition with one another as to which can claim to be more authentic. In this view, which is now the prevailing social-scientific understanding of masculinity, the standards by which a “real man” is defined can vary dramatically across time and place.

Connell and others theorized that common masculine ideals such as social respect, physical strength, and sexual potency become problematic when they set unattainable standards. Falling short can make boys and men insecure and anxious, which might prompt them to use force in order to feel, and be seen as, dominant and in control. Male violence in this scenario doesn’t emanate from something bad or toxic that has crept into the nature of masculinity itself. Rather, it comes from these men’s social and political settings, the particularities of which set them up for inner conflicts over social expectations and male entitlement.

“The popular discussion of masculinity has often presumed there are fixed character types among men,” Connell told me. “I’m skeptical of the idea of character types. I think it’s more important to understand the situations in which groups of men act, the patterns in their actions, and the consequences of what they do.”

As this research was popularized, however, it was increasingly mischaracterized. By the mid-2000s, despite Connell’s objections, her complex theories were being portrayed in ways that echoed mythopoetic archetypes of healthy and destructive masculinity. In a 2005 study of men in prison, the psychiatrist Terry Kupers defined toxic masculinity as “the constellation of socially regressive male traits that serve to foster domination, the devaluation of women, homophobia, and wanton violence.” Referencing Connell’s work, Kupers argued that prison brings out the “toxic” aspects of masculinity in prisoners, but that this toxicity is already present in the wider cultural context. (Kupers told me that he believes critics of his study incorrectly assumed that he claimed masculinity itself is toxic, though he acknowledged that the article could have explained his position in greater detail.)

Since then, the return to toxic masculinity has leaked from academic literature to wide cultural circulation. Today the concept offers an appealingly simple diagnosis for gendered violence and masculine failure: Those are the “toxic” parts of masculinity, distinct from the “good” parts. New proponents of the concept, sometimes unaware of its origins, tend to agree that men and boys are affected by a social “sickness” and that the cure is cultural renewal—that is, men and boys need to change their values and attitudes. Former President Barack Obama is championing mentoring programs as the solution to a “self-defeating model for being a man” in which respect is gained through violence. A range of classes and programs encourage boys and men to get in touch with their feelings and to develop a healthy, “progressive” masculinity. In some educational settings, these programs are becoming mandatory.

Certainly, these programs can have a positive impact. Research consistently shows that boys and men who hold sexist attitudes are more likely to perpetrate gendered violence. Connell herself notes that “when the term toxic masculinity refers to the assertion of masculine privilege or men’s power, it is making a worthwhile point. There are well-known gender patterns in violent and abusive behavior.”

The question is: Where do these sexist attitudes come from? Are men and boys just the victims of cultural brainwashing into misogyny and aggression, requiring reeducation into the “right” beliefs? Or are these problems more deep-seated, and created by the myriad insecurities and contradictions of men’s lives under gender inequality? The problem with a crusade against toxic masculinity is that in targeting culture as the enemy, it risks overlooking the real-life conditions and forces that sustain culture.

There’s genuine danger in this misperception. By focusing on culture, people who oppose toxic masculinity can inadvertently collude with institutions that perpetuate it. For example, the alcohol industry has funded research to deny the relationship between alcohol and violence, instead blaming “masculinity” and “cultures of drinking.” In this regard, the industry is repeating liberal feminist arguments about toxic masculinity. However, there is strong evidence that the density of liquor shops in a given geographic area increases the local rate of domestic violence. Any serious framework for preventing violence against women will address alcohol availability as well as masculine norms and sexism.

The concept of toxic masculinity encourages an assumption that the causes of male violence and other social problems are the same everywhere, and therefore, that the solutions are the same as well. But as Connell and her cohort have spent years demonstrating, material realities matter. While themes of violence, entitlement, and sexism recur across communities, they show up differently in different places. In one Australian Aboriginal violence-prevention program that I evaluated with colleagues, Aboriginal educators worked in partnership with men and boys to identify the key drivers of gendered violence and inequality. Solutions were rooted in cultural pride, tailored to local contexts, and underpinned by recognition of the intergenerational impacts of racism and trauma. The program understood that masculinity itself isn’t toxic, and instead sought to understand and change the roots of toxic gendered behavior.

Those roots are quite different than, for example, the roots evident in majority white, wealthy communities, where male violence and sexism are commonplace. Responses to gender inequality in professional workplaces, such as programs to stamp out sexism in employment culture and practices, have particular purchase in middle-class communities. They’re not universal solutions—and they don’t have to be. Recognizing differences in the lives of men and boys is crucial to the effectiveness of efforts to resolve gender violence and inequality.

Question of the day - What do you think is a positive example of masculinity?

What do you think is a positive example of masculinity?

May 7th 2021 - The WORST Side Hustles (That Are Actually Popular)

May 6th 2021 - The Conversation We're Missing About Police Brutality

May 4th 2021 - How to Bring Real Change to Your Community

CAT: The Legacy We Leave